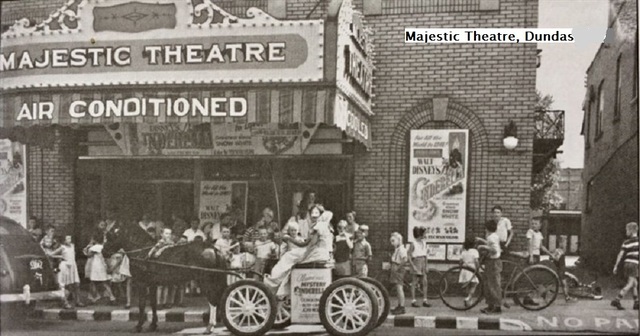 The Majestic Theatre opened in 1929. It was sold to Odeon Theatres in 1948 and renamed Roxy Theatre. It closed in March 1961. It was converted into a dancehall, which closed in 1981. The building is now in housing and retail use.

The Majestic Theater is still standing today but is being used as a clothing store at this time.

It still has the old box office in front of this classic movie house. I would be nice to see someone restore the Majestic in Downtown Dundas.

Where exactly is this theatre? Any help would be appreciated.

Right in ‘downtown’ Dundas, on the main street. It is now a health food store, the Horn Of Plenty, The 24 King St. W. Dundas Ontario L9H 1T7. I have been unable to locate any information about the Majestic, other than a reference to 1929 from an illustration hanging in the store.

Here’s an update, courtesy of the Dundas Historical Museum:

The Unique Theatre operated from 1909-1916 by the Paling Bros. at 18 King St. West in Dundas. They sold in 1916 to Reg. L. Billington and he changed the name to the Strand and Mr. Billington operated it from 1916 to 1921. In 1921 the name changed to the Queen’s and it was operated by Guest & Billington. In 1928 Reg. L. Billington bought the Swanson property next door to the theatre and moved the house to 24 Park St. W. In 1928 Billington sold the property where the Queen’s Theatre stood to John Craven who constructed a furniture store there and Billington constructed a new movie theatre on the old Swanson property and called it the Majestic Theatre.

The Majestic Theatre operated from 1929-1948 at 24 King St. West in Dundas. It was operated by Guest & Billington. In 1948 Mr. Billington sold the Majestic to his brother-in-law, Fred Guest. After Mr. Guest’s death, Fred Yates, his nephew, inherited the threatre, but was no interested in it so he sold it to his uncle, Jack Guest. After Jack Guest’s death in 1947, his widow sold to Odeon Theatres Inc. and the name changed to the ROXY.

Currently, it is a bulk/health food store called The Horn of Plenty.

This from the Dundas Valley Historical Society:

Moses, by now an old man, says his farewells to his wife, Sephora, and to his chief minister, Joshua, and turns to ascend the Mountain of Sinai to meet his destiny. He pauses, turns, and gives one final wave over his domain. Music from an unseen orchestra builds up to a crescendo, and the scene is over. Pre-Christian Israel? No, the scene is actually in Dundas, and the time is March 1961. The epic motion picture classic â€œThe Ten Commandmentsâ€ has just been screened in the Roxy Theatre, and the final curtain marks the last film for the old Theatre after more than thirty years of delighting audiences.

The theatre building was constructed in 1929 by Reginald Billington. The Majestic Theatre entertained the Dundas community with feature films from the decade of the Depression in the 1930s through the Second World War years in the 1940s. Kids were always checked at the door for pea shooters, and cap guns were always collected, especially before a Tom Mix western feature.

Reg Billington had been a local theatre owner since 1916, when he purchased the Unique Theatre at 18 King Street West, and operated it with his brother-in-law, Fred Guest as the Strand, and later, the Queenâ€™s Theatre. In 1928, he purchased the property next door at 24 King Street West, and it was at that address that he built the Majestic Theatre, which he continued to manage with Mr. Guest.

Mr. Billington eventually sold his interest in the building to Mr. Guest. After Fredâ€™s death, the Theatre was inherited by his nephew, Fred Yates. But, not being interested in the movie industry, he sold it to his uncle, Jack Guest. After Jackâ€™s death in 1947, his widow sold the interests to Odeon Theatres Inc. and the name on the marquee was changed to the Roxy Theatre. In 1958, the building was bought by Mr. Ephram Slote, and â€œThe Roxyâ€ continued to screen films for Dundas movie goers until March, 1961, when – because of low attendances and rising costs – the curtain rang down for the last time on the only movie theatre in Dundas.

The building was then transformed into a dance hall. The seats were removed, and hardwood floors were installed, and the new hall became known as the Club Safari. There were teen and singlesâ€™ dances, live entertainment, and even gospel meetings, but the Club was not an overwhelming success, and the building went up for sale in 1981. After sitting empty for a few years, there were concerns that the building would be torn down.

Those fears were put to rest in 1984, when the former theatre building was purchased by Neil and Denise Gloster, and was redesigned as the new home of their business enterprise. â€˜The Horn of Plentyâ€™, a natural and bulk food store, opened in1980 in a smaller location in downtown Dundas, just a few away from their new location. But as the business thrived, a larger location was needed for retail expansion. After extensive renovations were completed, â€˜The Hornâ€™ was opened for business, and its product line was expanded from 200 to 4000 items.

In 2001, the building was resurrected as a movie theatre once again, albeit briefly, when the mini-series â€œHavenâ€ was filmed in downtown Dundas. For a brief moment in time, the old Majestic and Roxy Theatre of 1929 – 1961 was revived as the Oswego Theatre of 1944 small-town New York.

Today, if you look closely, the building still exhibits plenty of evidence of its former life. Though the marquee is gone, the box office is still prevalent, and the building facade is intact. In 1994, the Intermission CafÃ© and snack bar was incorporated and named in tribute to its past occupation."

Many thanks to Stan Nowak for this information!

The seats were actually not removed but left in place and were only removed when we bought the building and the fire department insisted that they be removed in case of a fire . The seats were purchased by the Port Dover little theatre and removed with great difficulty through a small access door. The original boiler is still in the basement . We purchased the building from William Hutchinson .

Thanks for clarifying what I have been saying for years, though I was unaware they had been removed. I grew up just 2 blocks from the Theatre and one day happened to be at the back of the alley between the Butcher Shop and Theatre. An original Exit Door on the back right was open and I could see the rows of seats still under the hardwood floor. As in most Theatres, the seats sloped from the back down towards the Screen. The hardwood dance floor was constructed level so I imagine only the seats for a few rows at the back where originally removed. I later danced there at Club Shade Blue on Friday Nights. Also, if you are shopping at the Horn of Plenty,if it is still open, the original washrooms are/were intact and operating.

About two years back, the former balcony and projection booth, of the Majestic, was gutted to become 5 apartments.

The upstairs of the cinema had survived intact since the building was converted into a health food store back circa 1981.

There was an article in the Hamilton Spectator, of the view looking out of the projection room window, looking at the ceiling, which was green and gold.