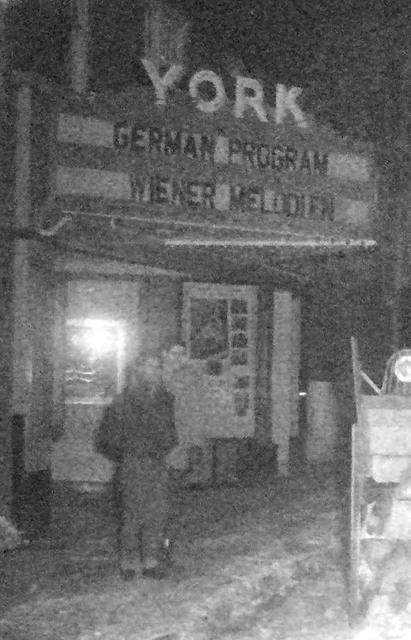 Opened as the China Cinema in 1945, it was located in the heart of Hamilton’s Chinatown. In 1955, the theater was renamed the York Cinema.

Here is some infomation about the old York theater.
At one time there was two York theaters in Hamilton. Back in the 1970’s the York Cinema closed at its Downtown Hamilton location, but two week later the “York” name moved to the Hamilton Mountain where it re-opened its doors untill 1985. The theater on the Mountain is now called The Movie Palace.

Chuck1231’s 2009 comment with the link to the photo of the York Theatre, should be posted on the Movie Palace listing (page?). Lyceum/Mountain/York/Movie Palace/Mountain.

This theater was not called York Cinema. Just York. The York Theatre. “The 448-seat theater closed in 1985.” This is incorrect. The theater opened in l940, and had 400 seats. The site of the York (the north side, near Hess) is now the playing/football field of Sir John A. MacDonald School. The school opened in 1970. The Google street view is wrong. It shows York Road in Dundas. York Street was renamed York Boulevard.

The theater opened in l940, as the York. So the “China Cinema in 1945” is incorrect. If a Chinatown area existed on York Street, I do not recall this. I think the York closed in the late 1950’s or early 1960’s (a victim of television, I’m assuming). I will have to do some research on this theater. There is not a lot written about it. I have only seen one picture of this place. I don’t know how long the building existed after it closed as a theater.

The 2004 comment by mrcinema is incorrect. The York on York Street was closed and/or demolished by the late l960’s. The Mountain Theatre on Concession Street was renamed the York in the early 1980’s. It was named the York when it closed c.1985. It was vacant, for a time, then used as retail (used sports equipment) before a started conversion to medical offices was abandoned. Later it was called The Movie Palace…

For Google Maps to fetch the correct location of the York Theatre, the address field should be changed to read: 164 York Blvd Hamilton, ON L8R 3L4

Wiener Melodien, on the marquee in the photo currently displayed above, was an Austrian movie made in 1947, according to IMDb. It was released in the U.S. in 1950, but I suppose it might have reached Canada earlier.