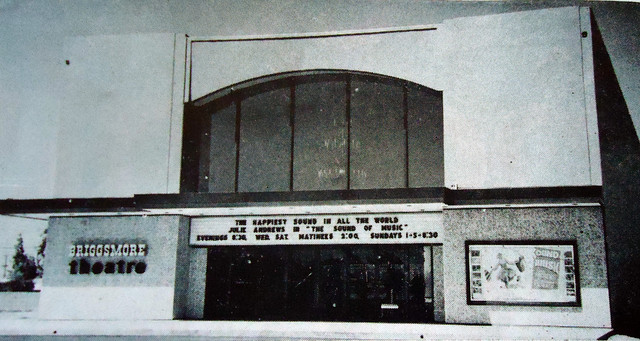 Opened April 26, 1967, the Briggsmore Theatre was originally planned to be a ‘Cinerama’ style screen. At time of raising-lacing up screen, it was discovered the builders were about a total of eight feet too narrow. Decision was to create a 70mm house.

Projection system setup as a 35-70mm. At the time, this was one of only five such houses in the United States. Had a six-track stereo sound system. Behind the screen were five two-way speaker systems, with eight surrounding speakers in the theatre. Auditorium seating was single floor with left-center-right aisle configuration. The front entrance was all glass with a huge cathedral style window. The lobby had a 11 foot tall three-tier crystal and brass chandelier and when illuminated could be seen from the street. The entire house was very elegant in design and decor.

The opening showing of “The Sound Of Music” was booked for four weeks, it was held over for total of 17 weeks. A first for Modesto theatres. My knowledge is first hand, as I was the manager given this, (flagship) theatre to undertake.

We had the ‘gala opening’ same night in conjunction with the new Prescott Drive-In, located at Briggsmore and Highway 99. It was owned by Robert Lippert.

The Briggsmore Theatre was later ‘tri-plexed’, then completely removed, (I believe) in the 1990’s.

Theatre was designed by: Ainsworth and McClellan and William B. David of S.F. Redwood Theatres president Richard Mann, father who started the theatre chain was George Mann.

What happened to all of the comments on this page??? There used to be several posts, some theater history info and an argument or two. Did a computer glitch wipe them all out? Or were they deleted by a moderator?

Google news archive’s microfilm for the opening (with the drive-in) starts at View link
for the next 5 pages.

Thanks to Mike Revest for the posting of the Modesto Bee ads for the Briggsmore/Prescott opening.

I was hoping, (by now) that Cinema Treasures would be ‘hosting’ photos again. I still have all the original Bee ad pages as shown.

One error in ‘opening coverage page’ was that the Bee accidently switched photos of Richard Mann, (Briggsmore owner) and Robert Lippert, Prescott owner).

Couple of other trivia items: in my initial Briggsmore comments and info in posting above I did not mention that the theatre was fitted with a ‘bank’ of vending machines in lobby, instead of consession snackbar. Mr. Mann decided he wanted “no popcorn, hot dogs, etc” served…only drinks and candy. That turned into operation-maintainence problems, ie: extreme long lines at intermissions and the breakdown of machines. The company that owned and maintained them, (Servomation) was very prompt in sending out repair teams, and at one point had to station a service rep in the lobby. Briggsmore finally refitted with consession bar.

Also, Modesto had really bad rain storms the week prior to opening. The parking area for the theatre, (in shopping center) was not yet paved. It was a huge muddy mess. Contractor laid a makeshift walkway platform from the theatre front to the paved area at Bank of America that fronted McHenry Ave.

Correction: Meant to type Mike ‘Rivest’, but my ‘thumb’ got in the way…sorry Mike.

I think I was the one who originally posted that George Lucas previewed American Graffiti at the Birggsmore in 1973, and did a meet-and-greet for his hometown audience.

I have lots of fond memories of going to the Briggsmore in the 80s as a child (I saw the original Clash of the Titans a bunch of times there). I ended up working there in the late 1990s, just before it closed down. Those were bittersweet times for the Briggsmore.

The old Briggsmore is still technically there. Only the newer addition was demolished, the original 1967 structure is still around. A credit union gutted the interior and the exterior is unrecognizable. The old cement walls are still visible in the back of the building.

The Briggsmore Theatre was the fancy theatre in Modesto when I was growing up. I remember going to it not too long after it opened with my mother and grandmother. It was the spring of 1967. The cost of a ticket was $2.50 for an adult ticket, and I was 12 years old when we saw it, and I looked it! LOL. What a beautiful theatre it was. I would wind up doing graphics for movie theatres in Modesto several years later, including ones for the Briggsmore! What nice memories I have of Modesto.