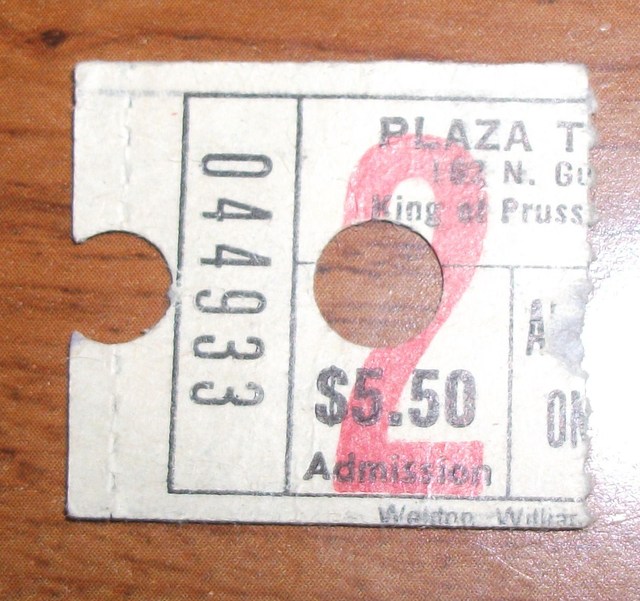 The stand-alone Plaza Theatre opened May 19, 1965 with Charlton Heston in “Major Dundee”. It received its name by being located across the street from the Plaza at King of Prussia Mall. There was some glass exterior frontage, and a nicely designed lobby.

Seating was on the main floor and a balcony. The balcony was set relatively far back in the auditorium. The Sameric Corporation took over the theatre and the renamed Eric Plaza Theatre was twinned in 1978 by building a wall down the middle of the auditorium and reopened November 22, 1978. Even after twinning, each auditorium had between 500 and 550 seats and a not too small screen of about twenty five feet wide for ‘scope films. Curtains were used in front of the screens until 1994 when United Artists ceased using curtains.

The theatre was later operated by United Artists after they bought Sameric Corp’s. theatres in 1989. The theatre closed in 1999 as United Artists opened in 2000 the King of Prussia megaplex on the other side of the mall.

The Wolfsonian in Florida have a design drawing and three photos of the theatre in their collection. Drew Eberson is attributed as the architect.

The “zone” of movie theaters which didn’t show the same movie at the same time included the Plaza, the nearby King and Queen, a movie theater at the Valley Forge Convention Center (possibly in the hotel), and the Gateway at Devon, which was a three screener operated by AMC.

I know this theatre was owned by RKO Stanley Warner. They also owned the Moorestown Plaza Theatre before both were bought by Sameric.

The Plaza had to have been opened pre-1969. Both My Fair Lady (1964) and Olivier’s Othello (1965) were there on hard ticket. Also,Close Encounters of the Third Kind (1977) played there BEFORE it was twinned.It was a beautiful theatre; absolutely one of the best places to see a film in the suburbs, especially 70mm, 6-track.BTW it had a virtually twin in Cheltenham—The Cheltenham Theatre. Built a few years prior to the Plaza, also owned by Stanley-Warner, most likely the same architect. The interior was just about identical to the Plaza. Played both The Sand Pebbles and Becket on hard ticket, and a sub-run of Lawrence Of Arabia, which was stunning in 70mm/6-track.

Was this place completely torn down or is it part of an existing building – maybe Crate and Barrel?

The Wolfsonian archives in Florida have a date for this theatre of 1965,so Drew Eberson would be the architect as John died in 1954.The Cheltenham Theatre was also Drew Eberson built somewhere between 1960 and 1963.

The Boxoffice Magazine has a mini artice in the 4/6/1964 magazine about having a US District aproving Stanley Warner’s petition to built the Plaza Theatre.

I seem to remember that whenever I went to see a movie at this theater I was always stuck hearing the movie playing on the next screen over too. Something was loopy with their sound-system.

I went to see the Doors here and I was pretty clearly hearing the Silence of the Lambs at the same time. Not a bad cinema otherwise.

I managed this theater in late ‘89 and '90. Great theater. There was a pack of pictures in the office with opening day photos of the theater. The first movie was Major Dundee. The original concession stand was between the theater doors, but closed up and used for storage by the time I was there. Really neat decor and red leather in the original snack bar. I wish I would have copied the pictures or even taken some of my own!