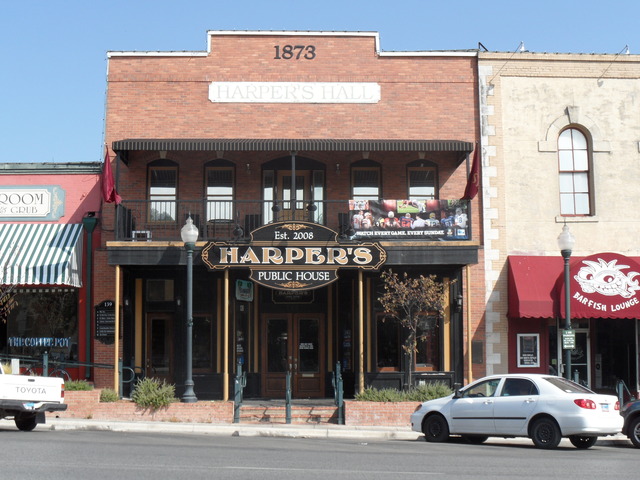 In 1914 the Griffith Brothers bought this simple frontier opera house, thus marking the first theatre acquisition in what would become a vast Texas and Oklahoma movie theatre circuit empire.

Unlike major chain founders, Griffith Bros were not farsighted and would always remain big frogs in little ponds as the majority of their theatre holdings were in small towns. Rather than build, Griffith usually abosrbed existing theatres. Griffith Bros. understood the value of showmanship and with each new acquisiton installed expensive marquees with lots of razzle-dazzle lighting effects. On the other hand, the brothers seemed to take little interest in the esthetics of theatre interiors and too often let their auditoriums slip into disrepair.

During the 1950s the circuit was renamed Video Independent Theatres after RKO-General bought out Griffith. Video spent a large amount of money to bring each theatre up to RKO standards. Former Griffith managers rose through the ranks to run the circuit under a new name. Through outmoded techniques learned from Griffith Bros, these "old work horses" just couldn’t foresee or understand the new ideas of a young breed of exhibitors who were coming on the scene to overpower an ancient circuit.

When the end came for Video the fall was shift and final. You are invited to express here your own opinion on this subject.

If you want to see vinatge images of the Grand and many other Griffith Bros cinemas type in word “theatre”,
View link

The Grand Opera House in San Marcos is listed in the 1897-98 edition of the Julius Cahn Official Theatrical Guide. The Manager was J.F. Travis; the seating capacity was 500. Ticket prices ranged from 50 cents to $1, and the house had electric illumination. The proscenium opening was 18 feet square, and the stage was 20 feet deep. There were 6 members of the house orchestra. There was one daily and 3 weekly newspapers, and 4 hotels in town. The 1897 population of San Marcos was 3,000.

you can read and download The Julius Cahn-Gus Hill theatrical guide and moving picture directory at View link . it is over 100MB

By September 2011 this had become Harper’s Public House. See my photograph.