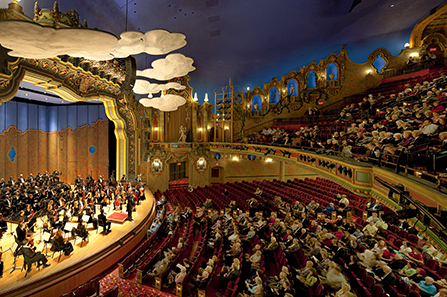 Designed by John Eberson as Loew’s Theatre, the theater first opened its doors in 1928. The Loew’s Theatre ended its days as a movie theater in 1979 and was restored and reopened in 1983 as a performing arts center, the Carpenter Center for the Performing Arts.

The Carpenter Center closed in late December 2004 for a $73 million renovation and restoration, becoming part of the downtown peforming arts complex known as Richmond CenterStage.

CenterStage reopened the Carpenter Theatre on September 12, 2009. It now features a larger stagehouse to accomodate Broadway shows, and an enlarged lobby area. The former Carpenter Center, which has been renamed the Carpenter Theatre, is one of four distinct venues that make up Richmond CenterStage, which also include the Libby Gottwald Community Playhouse, Rhythm Hall, and the Showcase Gallery.

My uncle John J. Phillips, born 1905 in Lynchburg was a well known figure in Lynchburg for his musical talents. He played organ for theater and churches, taught music, was active with the YMCA, played in several bands. The one we can document with photos was “the Vagabonds.” In 1930 census, we was working in Winston Salem NC as a theater organist. It evidently was a short term position.

At his death, there was a tribute written in the newspaper by a long time friend that stated Uncle John had played organ for the Richmond Loews theater. It seems it would have had to be the very late 1920’s, or the early 1930’s.

If anyone can either prove or disprove his working in Richmond, I would be very happy to hear from them. He lived a very quiet personal life, was modest and unassuming. He never married, so no family to pass on the stories. Thanks. Jim Phillips

I don’t understand why movie palaces renovated into performing arts centers have to always have hideous racks of lights out in glaring plain view. The historic theatres I’ve visited in Canada never have this, come to think of it, the Loew’s in Jersey City doesn’t either, and I hope it never does. Talk about ruining the atmosphere of an atmospheric!

I made my first visit to the Loews around 1960 or so for an animated version of THE SNOW QUEEN and later ADVENTURE OF HUCKLEBERRY FINN. It was an eye popping experience with a huge curved screen (advertised on one of the doors as “Our panoramic Wide Screen.”) Later saw all the James Bond films there, up to DIAMONDS ARE FOREVER and often in double features of same. Also the Pink Panther films, BLOW UP, BANANAS and many others. By the time I saw my last film there, MAHGONNY, the floors were sticky and the place was starting to look shabby, as indeed downtown Richmond had begun to decline. It is notable that GONE WITH THE WIND had its initial showings in Richmond at this theatre in 1940. Years later a restored version was shown around 1989 with a parade and lots of ceremony. However there was a problem with audience members who tried to take FLASH pictures of the movie during the screening. The audience had to be reminded at intermission not to do this.