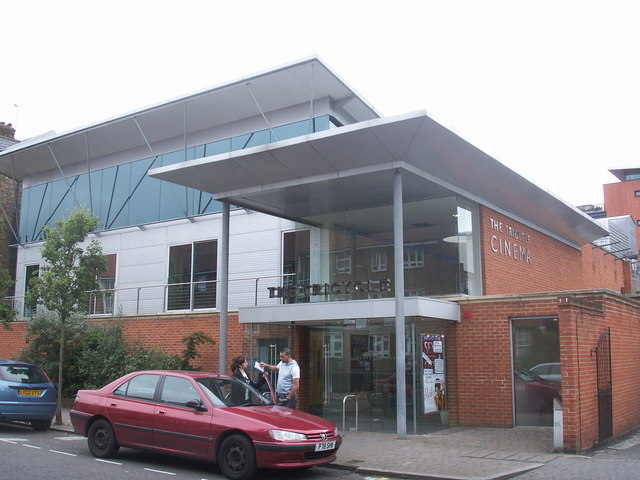 The Tricycle Cinema shares an entrance with the Tricycle Theatre on Kilburn High Road in the northwest London district of Kilburn. It also has it’s own separate entrance around the corner on Buckley Road. It is designed in a modern style by architect Tim Foster. The auditorium is underground at basement level and is well stepped to allow a good view from every seat. Three broad panels form the side-walls which extend across the ceiling, each being recessed and lit by coves of concealed lighting. At street level there is a private box for 11 persons and this is located next to the projection box which is equipped to screen 35mm, 16mm and video films.

The design on the screen curtain is unique to this cinema. It is in the form of a tricycle which upon closer inspection is made up of names of sponsors, patrons and film stars who have given their support to the cinema. Although a modern cinema, the building has the feel and looks of being in a ‘modern-day’ version of a 1930’s Art Deco style Odeon cinema.

The Tricycle Cinema is a well attended cinema in an area which has been devoid of films since the closure of the mighty 4,004 seat Gaumont State Theatre located just along the road.