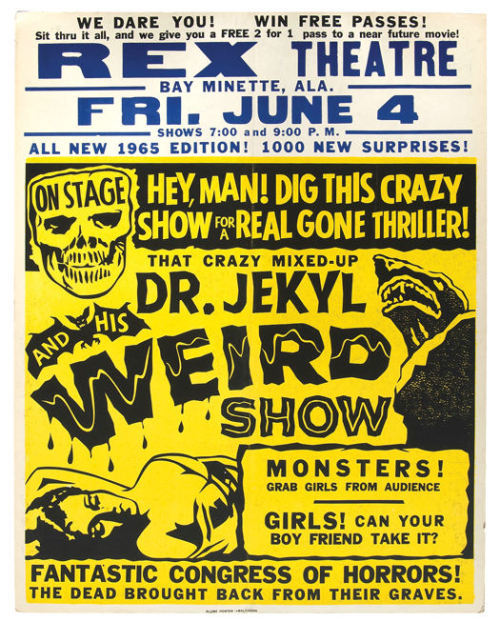 The Rex Theatre was opened in summer of 1932. In August 1944 it was taken over by McLendon Theaters and was remodeled, reopening on January 26, 1945 with Eddie Cantor in “Show Business”. It was still open in 1965. Today only the outer side walls remain, with the space of the former theatre now a garden.

The Rex was part of the Fred T. McLendon theater circuit in the early seventies.

After the nearby Loraine Theatre closed in the fall of 1930, the city had another spit-in-the-bucket idea to add another theatre to the city of Bay Minette. The answer was the Rex Theatre. Although I can’t find the grand opening ad for this, the Rex Theatre opened in the summer of 1932. The theater battled against an unknown-history Baldwin Theatre, also in Bay Minette, which was operated by the Peoples Theatres of Alabama, owned by Fred T. McLendon of McLendon Theatres who operated 2 other theaters nearby. Although with Fred being a popular geek into the business, McLendon Theatres however still had a probability to take its business into the Rex while working with the nearby Baldwin and 2 others which he took ownership in August 1944 just shortly before the theater went into remodeling. It took time until the Rex Theatre reopened under the McLendon Theatres chain on January 26, 1945 with the film “Show Business” along with a Donald Duck Cartoon and a Paramount Newsreel. While the Rex Theatre (with before-and-after CinemaScope that was installed in January 1955) continued successfully into the McLendon chain, the Baldwin Theatre died on films in parts of the 1940’s and most of the 1950’s, and was most likely that the Baldwin Theatre continued to demonstrate local special events.

Tucked quaintly between the buildings on North Hoyle Avenue, the Rex Courtyard is a beautiful space available for special events. It is named for the former Rex Theatres whose outer walls still remain and are covered with beautiful vines. One of the walls also sports a lion fountain. I’ve uploaded two pictures.

Snipes perhaps you will establish the Lorain and Baldwin on CT.

I Will If I Can Find More Information On It, Which Will Be Later, Sometime Soon As Perhaps. The Loraine Used To Have A Former Theatre Name, But Confused Me On The Names. It Was Once Either The Dixie Or The Sanger. There Is A Cozy Theatre (1910’s) And A Hub Theatre (Opened In 1933) Too Which Will Be Published Sometime Soon, But I’ll Look Into The Deeper Pages As Soon As Possible. The Baldwin Though Had An Unknown Opening Date For Now, But I’ll Consider It In The 1930’s. Bay Minette Is Actually Very Hard On Finding Opening Dates Of Theatres And Closing Details.