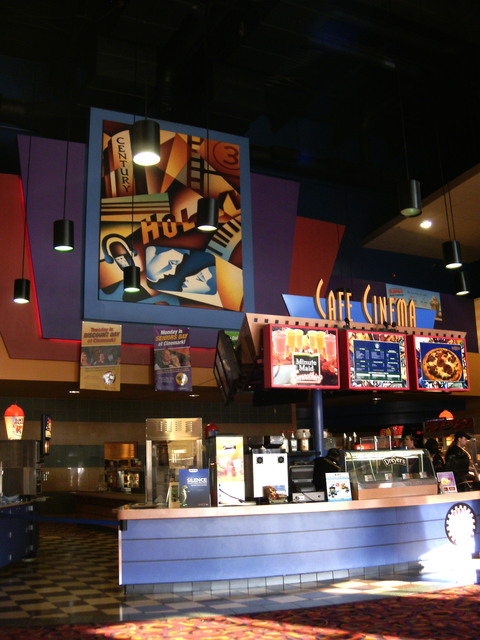 Opened August 14, 1998, this modern megaplex has 16 screens and stadium-style seating.

Opened during Century’s big expansion push in 1996, this theatre’s layout and color scheme is nearly identical to the Century 16’s in Anchorage, AK; Aurora, CO; Salt Lake City, UT and Portland, OR.

This theatre is set so far back from the street with a chain fence around It. Hard to find as no neon sign is out on the street. I think this is the spot the old Century Syufy Domes in Reno were on many years ago? It looks lost surrounded by empty lots with weeds growing. Looks like a mall was to go in but never made It. Nice curved screens and good sound. Only one person in the boxofice selling tickets. You have to go inside to get your ticket as they don’t even open the outside window boxoffice(at least on a Thursday night). How sad to have to wait so long to buy a admission ticket because they won’t open all the box windows with more help. CC and Fandango takes forever.

Did more research and the Syufy C 21/22 domes were across the street from the Century Park Lane and down a little bit that is now the parking lot for the Peppermill Casino. Check out the Peppermill Reno with It’s giant curved LED Cinerama screen near the inside entrance.

This theatre was built outside the Parklane Mall which was torn down a number of years ago. I’ve heard rumors that the site is finally being redeveloped which will no doubt help this theatre thrive.

In 1988 I worked at a Syufy theatre right across from the Peppermill Casino. It was like eight or 12 screens, all on one floor; the last screen was so isolated and the carpeting cracked so much) that, as an usher, I could sit on my butt and watch the movie (a major infraction) and if the manager entered the auditorium I could hear him coming five or ten seconds before the door opened (so I could get up and pretend to be patrolling the auditorium). I wasted lots of time that way. The manager was named Brent Coleman; one of his assistants, John, was so rude and nasty that managers from other theatres refused to deal with him personally. Most of those people (even the customers) seemed to have attitudes. Of course, people in Reno weren’t half as bad as those in Las Vegas. You want surly? Go to Lost Wages!