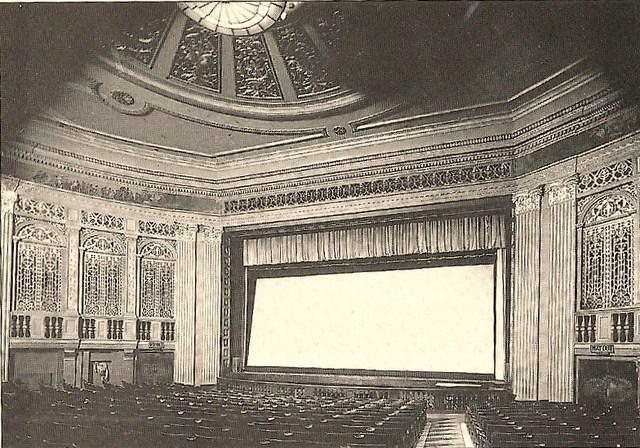 Located in Harrow, Middlesex in the north of Greater London. The Granada Theatre was built for Sydney Bernstein’s Granada Theatre’s circuit and opened on 25th October 1937 with Gracie Fields in "The Show Goes On" and Ruby Keeler in "Ready Willing and Able" The opening ceremony was performed by film stars Jessie Matthews and Sonnie Hale. The Wurltzer 3Manual/8Ranks (with Grand Piano) theatre organ was opened by Harry Farmer.

The exterior was rather plain and the brickwork was broken up by the placement of a large window which allowed light into the cafe/restaurant that was located above the entrance. Inside the auditorium, the decoration was considered to be a ‘standard Granada’ type with three sets of grilles in the side-walls close to the proscenium opening and a large feature in the ceiling from which hung a ‘Granada’ style chandelier. All this was the work of noted interior designer Theodore Komisarjevsky. There was a stage which was used only occasionally in the early days, but became more used in later years when ‘pop’ shows were touring the circuit. There was no flytower available for scenery, but there were four dressing rooms.

The Granada Theatre was one of the most profitable on the circuit at one time and in November 1973 it was converted into a 3-screen cinema. The 630 seat balcony screen used the main proscenium and retained the facilities of the Wurlitzer organ for concerts. Extra seating could be used in the former front stalls for overflow purposes. The rear stalls area under the balcony was converted into two mini screens, each seating 205.

It was taken over by Cannon Cinemas in January 1989 and re-named Cannon. In July 1995 Virgin Cinemas took control and the name changed to Virgin, but this was short lived as from 3rd May 1996 ABC Cinemas took control and it was re-named ABC. Six months later the ABC closed, due to the new Warner multiplex opening in the centre of Harrow. The closing on 7th November 1996 was marked by an organ concert with David Warner playing the Wurlitzer and the final film Ewan McGregor in "Brassed Off".

The building was boarded up for several years until plans could be arranged for a suitable use. Eventually after much debate and hesitation, permission was granted to convert the building into a health club and gymnasium. The proviso being;the Wurlitzer organ should be retained and made available to be played to the public. A small swimming pool was built in the former rear stalls area under the balcony and the balcony was re-stepped to provide room for gym equipment. There is a fold-down screen in the proscenium opening so that video images can be projected to the members of Golds Gym while they ‘work out’.

From 4th August 1988, the Granada Theatre was given a Grade II Listed building status by English Heritage.

The Harrow Granada still open in this 1978 shot:

Vintage photographs of the Granada, and it Wurlitzer organ console:
http://www.ukwurlitzer.co.cc/2217.html

I saw an orchestral concert here in the mid 1960s. A school outing. Did not see any films here

This was my first cinema that I started as a projectionist. I have great memories of this great little cinema. The interior is so beautiful.I was at this cinema from 1982 to 1987 and I had some great times. Steve Lowe

A separate entrance to the left leads up to the Nuad Thai Massage and Well Being Clinic. This was probably a bar area at the front of the cinema and the stairs were an exit from the balcony

This is, of course, not the real ABC Harrow (the former Dominion), that is listed as the Safari cinema. I wish that Cinema Treasures would list the name under which the cinema was best known, rather than the last name it operated under.

A Point of Interest.. This Granada had been one of the joint ventures with ABC as partners…