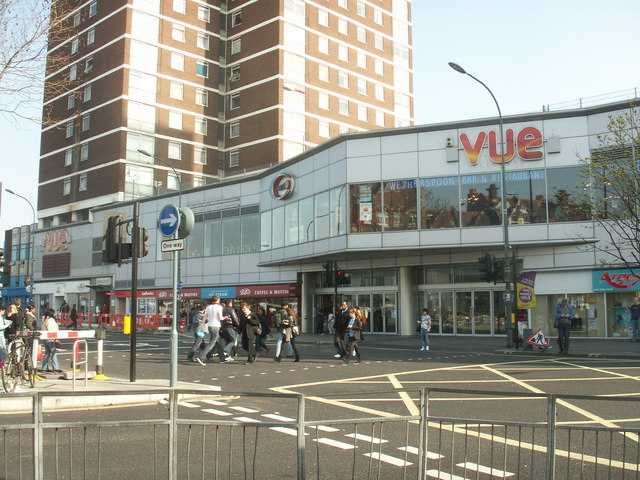 It was re-branded Vue in 2004 and the seating capacities in the screens varies from 387 down to 114.

Visited Screen 5 today for a preview screening, a typical turn of the millennium VUE (or rather Warner Village.)

There are a couple of rows of (newer?) “VIP seats” in the middle of the auditorium, but the rest of the seating is tired, dirty, with tears in the upholstery. The sidewall stretch fabric is sagging in places, and there is even a section of carpet held down with gaffer tape! Considering the tickets for standard seats can be almost £11, this is quite unacceptable.

The screen is wall-to-wall and “letterboxed” for scope format; the lack of masking did not work well due to the high black level of the projection. The projection and sound quality were mediocre albeit in all fairness it was a preview screening of a “work in progress.” Rear array speakers are Martin Audio.

Case study on the installation of “acoustic wall treatments”:

The comment on Screen 5 states that Scope films are “letterboxed” on a 1.85 screen. As Screen 5 is the second largest auditorium, this rather implies that most screens are 1.85 with perhaps only Screen 9 (the largest) being the exception with a proper Scope screen. If so, this is hardly satisfactory for good cinemagoing today where 80% plus of films are shot in Scope.

The other comment with the case study link on acoustic wall treatments does show include a photo of an auditorium with a full Scope screen, though it is not clear if this is just a generic photo or one specifically from Shepherd’s Bush; if it is from there I presume it must be Screen 9.

PhilipWW: I think the case study photo probably is of the auditorium, that’s the same colour of acoustic wall covering as Screen 5, albeit it’s also the same as other “Warner Village” venues built at that time.

It needs a full refurbishment to bring it up to standard; I doubt such a project is a priority for Vue…

I’m astonished that this has lasted so long when there’s been another Vue literally minutes down the road in Westfield for seven years. Together that’s a huge 32 screens, but films often duplicate in both cinemas.

Having been puzzled how this multiplex was somehow inserted into a 1960s shopping centre*, a quick look on Google Maps revealed the answer—it was built above the multi-storey car park at to the rear!

(*1967 according to its Wikipedia page—rather than 1971 per the CT description—although I haven’t a clue which is correct.)

This is more obvious in Streetview photos, where added structure can be clearly seen.

One such scheme dated back to 1993, given a (refused!) planning application dated 27/05/1993. The plans are not available on Hammersmith and Fulham’s online planning records, so whether this was for a cinema is anyone’s guess; however, the development as built appears to date from 1997.

Wonder if this makes it a “unique” building housing a cinema—one might imagine similar somewhere in, say, the Far East—but at least in the UK?

Billy: A 25 year lease was taken so still around 10 years left on it; perhaps Vue have already negotiated a downward revision of rent.

Repurposing the cinema would seem to be difficult (e.g. it can hardly be converted to residential use, due to the requirement for windows alone;) and, given its location, “suspended” above a multi-storey car park, it might take a major redevelopment for it to be removed (and until such time one might imagine that Vue are not too keen on a competitor taking the cinema and undercutting their very successful Westfield site?)

I have recently revisited this cinema for several screenings and, whilst I can’t seem to locate my notes from these trips, I recollect that it has been tidied up slightly since my 2014 comment—no ripped seats or gaffer taped carpet in Screen 5, seats/auditoria clean, and if I’m not mistaken, the lobby/corridor to the screens has been fitted with new (current Vue “house style” dots on black pattern) carpet.

The toilets (under stadia) definitely need an overhaul, though.

In particular, I concur with SethLewis' comment that auditorium 9 is “good as anything out there for its time…”—on the day I attended, I was surprised at the quality of the picture/sound. The sound (Martin Audio) in particular is very good, and the picture—Sony S-XRD as with all non-IMAX VUEs—looked just fine, also. This does imply a good level of maintenance as the Sony S-XRD projectors are known for requiring periodic servicing, more so than DLP-based projectors.

The screen was masked to scope format; no idea if this masking is (or was!) moveable as the only the feature was shown (no adverts/trailers.)

Standard seating is by Figueras (logo on the rear) and is definitely “old school!” The interior is, too, with the late 90s Warner Bros. International Theatres “house style” having an oddly quasi-80s “post-modern” feel; however, the dark blue stretched fabric to screen end might be considered preferable to black stretched fabric.

Of course, all middle to last row seating is on a steep stadia—so one does not have to suffer “old school” sightlines!

Alas, according to Vue’s website, only auditorium 4 supports 3D.

Otherwise, in my view (no pun intended!), certainly preferable to the so-called “Xtreme” screens over at Westfield.

Foyer/lobbies always seem to be virtually empty, and, staffing skeletal; my recollection being one security guard and one person at the concessions counter!

A Coke Freestyle machine has been installed in the main foyer, so one must assume that Vue have an agreement for these to be installed in all their locations.

Now that would be a good idea!