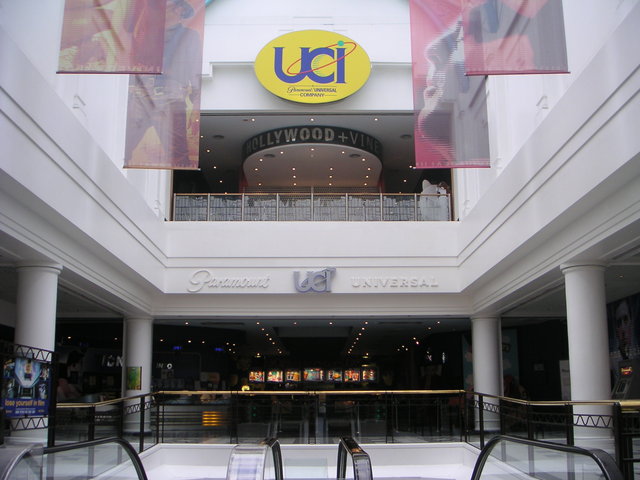 Located in the west London inner-city district of Bayswater. Originally a planned project of Cinema International Corporation(CIC) it was opened by United Cinemas International(UCI) as the 8-screen UCI Whiteleys on 1st December 1989. It is located on the 3rd & 4th floors of the former Whiteleys of Bayswater department store. With a total seating capacity of 1,552, capacities in the screens varied from 333 down to 125. It was re-branded Odeon in late-2006.

Whitleys Redevelopment — 15/10072/FULL is the main planning application; however, as changes were made to basement levels, the more obvious one to reference is a later variation application.

To quote from the summary: (My emphasis.)

263 documents (yes, REALLY!) are associated with this application.

The proposed cinema is accessed from Ground Floor Level, with three lifts down to Basement Level 3, with the cinema’s demise shown on the documents titled “GROUND FLOOR PLAN” and “BASEMENT 03” in the above-linked planning application.

The cinema is briefly covered in the Design and Access Statement, specifically p3 (PDF page number) of the document titled “DAS PART 2” in the above-linked planning application.

It says that the proposed cinema was moved to level B3 to allow for an increased “clear height of 6.5m… to meet the spatial requirements of contemporary cinemas” and “minimise the potential impact to its immediate adjacenies.”

Hence, the cinema layout shown in the plans appears to be indicative only of a possible arrangement.

Nevertheless, here are the details:

Each is shown having 5 rows of recliner seats in straight lines, except for 2-3 seats on each sides which are “toed in,” and the last row has 6 accessible spaces. Total seats per auditorium – 62 + 6 accessible.

A foyer area is also shown in the B3 plans, and the cinema’s entrance is shown on the Ground Floor Plan, with another lobby area, including seating (?).

Noting that the Design and Access Statement states a “clear height of 6.5m (~21ft.), it is clear that a 50ft. wide "scope” screen would, vertically, at best be a tight fit indeed, or impossible, suggesting that these “indicative” layouts are illustrative only.

Having a quick look at the first “Basement Impact Assessment” document, it provides an overview of the history of the site, alterations made to the Whitleys Department Store, and other historical material including “lost” rivers, should anyone reading this be interested in such.

N.B. For clarity, previous two posts removed; contents of which were amalgamated and revised for this post.

[ADDED TEXT TO OVERCOME “YOUR COMMENT APPEARS TO BE SPAM!” ERROR MESSAGE.]

Addendum: The Section 106 agreement available in 15/10072/FULL (Description field: “WHITELEYS+CENTRE+S106+AGREEMENT”) includes a clause stating that the cinema must be ready for occupation prior to the occupation of the retail units.

Further, in the previously linked variation application (16/12203/FULL,)the “Decision Notice” document in which permission is granted includes a condition stating that the cinema demise is restricted to such use only, with one reason given being “to safeguard the amenities of adjoining residents and future residents of the development.”

Just a correction on some of the details; when it originally opened screen 1 alone, had a capacity for 1200 people, screen 2 was 900. It had the largest auditoriums outside of central London. I worked there as an usher as part of the original team from November 1989 (first month was for training prior to the opening) to October 1990 and I worked the royal premiere of Ghostbusters II attended by Princess Anne. The multiplex had the capability of projecting a single print to all 8 screens, though that capability was never utilised, at least not while I worked there. For the royal premiere of Ghostbusters II, 8 separate prints were used for all 8 screens, but projected simultaneously.

I just added a photo of the marquee, which I took in 1991 when it was UCI. Never saw a film there, but the mall looked luxurious and pleasant at that time. I remember a good meal with friends at the Café Rouge. It was so miserable though, the last time I checked in 2011, and the cinema (now Odeon) looked abandoned although it was open. 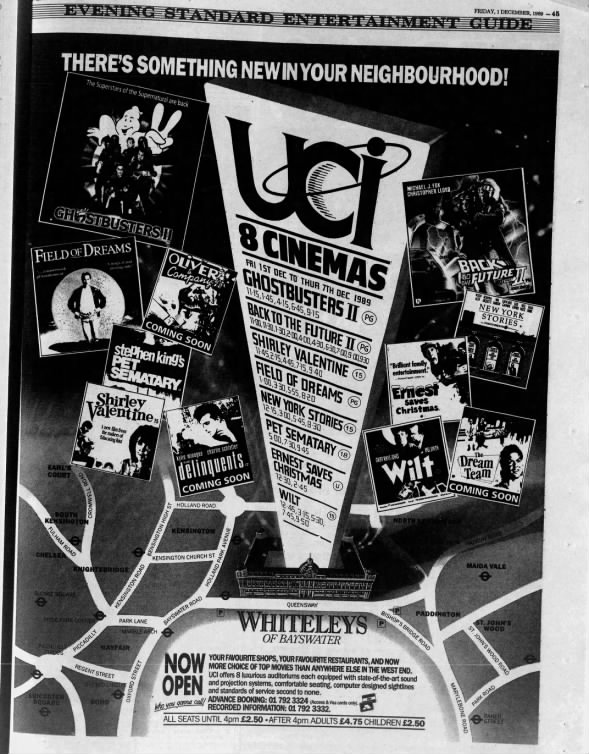 Grand opening ad posted. It was the first purpose-built cinema in London.

@rivest266 Thanks for posting this ad. It’s interesting to see what was playing when a multiplex opened.