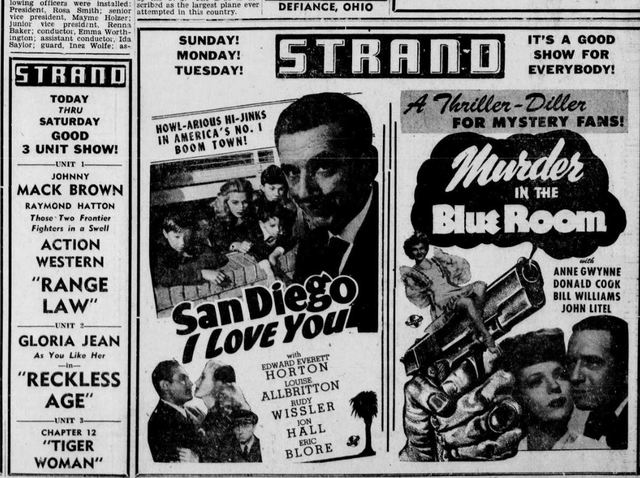 Built on the site of the Rex Theatre (later Rivoli Theatre) which was destroyed by fire on May 1, 1936. The Strand Theatre was operated by the Mallers Brothers chain and opened October 30, 1936. They operated it until 1956. This chain also ran the Valentine Theatre and Defiance Drive-In in Defiance. In 1960 the building was converted into retail space.

The August 15, 1969 issue of the Defiance News-Crescent says that the Strand Theatre occupied the site of a movie house originally called the Rex and later the Rivoli, which was gutted by a fire on May 1, 1936. Mallers Brothers, who had acquired the theater in 1934, rebuilt the building and opened the new house as the Strand on October 30, 1936.

Mallers Brothers operated the Strand until 1956, when they sold their holdings, which included the Valentine Theatre, to the Armstrong circuit. Armstrong dismantled the Strand around 1960, and the building was converted into retail space for Sears-Roebuck.

The records of the architectural firm Strauss Associates, successors to the practice of Fort Wayne architect Alvin M. Strauss, list among his works a 1936 theater project at Defiance for Mallers Brothers. That must have been the Strand.