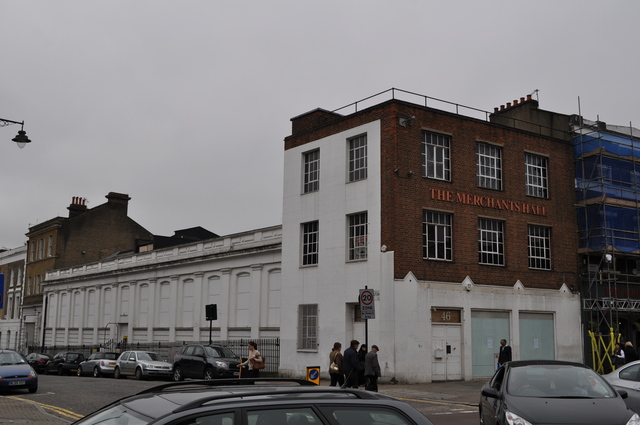 Opened in July 1911 as the Coronet Cinema with a seating capacity of 850. It is located in the north London inner-city district of Islington. located on the corner of Essex Road and Packington Street. The building had originally been a district post office and the architect in charge of the conversion was A.W. Hudson. The exterior was decorated in elaborate faiance tiles and had four small domes on top. Inside the auditorium the seating was on one level and the proscenium opening was 16 feet wide.

The Blue Hall Annexe Cinema closed in 1941, probably due to war-time conditions and never re-opened. It was taken over by hardware merchants Arnold Bash & Co. Ltd. This use was followed by William Bedford Antiques for use as a showroom, and this lasted into the middle of the 1990’s. The building was re-named ‘The Merchants Hall’ and was occupied by a used furniture store named Eccentricities until they moved out in 2013. When seen in September 2013, the building was securely shuttered. The original facade has been altered to a plain brick appearance, but the side wall of the auditorium on Packington Street is original to the building.

Was this building coloured blue?

Opened in the early-1910’s by Blue Halls Ltd. who had a small chain of 5 Blue Hall Cinemas in London.