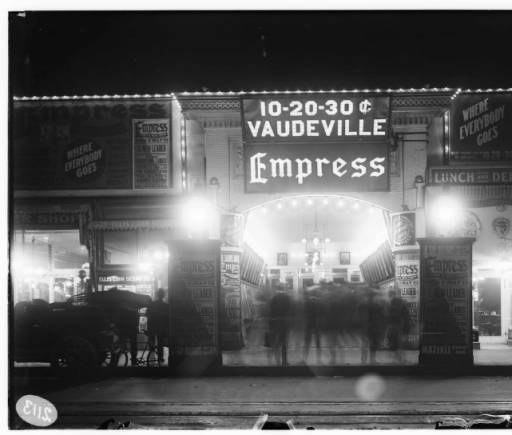 Another theatre with different entrances and addresses over the years. This theatre was apparently first called the Casino Theatre when it opened in 1903. By 1914 it was the Los Angeles Theatre. By 1929 it was the Capitol Theatre with 450 seats. Over the years it went through many name changes and remodels until it fades away in the 1930’s.

It also went through many uses including: vaudeville, movies, Spanish-language movies, live theatre, and a church!

By 1952 the address is listed as a parking lot. There are many articles about the theatre having a ‘hoodoo’ curse with managers and owners meeting all types of disasters and maladies.

I wouldn’t mind seeing ‘Fiddle Dee Dee’, but for my money I’d probably choose Ferry, The Human Frog over at the Broadway.

I don’t know….I think Kermit was a bastard child. Luckily, he made his way in the world.

I recently obtained photo by G. A. Kessler – the official photographer of Sullivan and Considine’s Los Angeles Theatre at 340 S. Spring and if I ever get a decent camera I will post it. But I will be showing it and other items concerning Spring Street at this Thursday’s Art Walk and the following night’s Fashion Night Out – Friday September 10th, 2010 6 – 10 PM – at the Continental Building at 4th and Spring.

The February 5, 1911, issue of the Los Angeles Herald had an item about this theater in a page six article about current construction projects:

“Frank L. Stiff, plans for a moving picture theater to be built at 340 South Spring street for Quinn & McLean. It will have tile entrance, ornamental plaster front, composition roof, metal lath, plumbing and electric wiring. The cost will be about $3OOO.”

Although the item didn’t say so,this must have been a remodeling of the house that had opened in 1903 as Waldeck’s Casino. Not even in 1911 could $3,000 build an entirely new theater in downtown Los Angeles.

The promoters, Quinn & McLean, must have been John A. Quinn and G. H. McLean (or McLain, as his name sometimes appears) who had already operated or were still operating the Ideal, the Bijou, and the Banner Theatre.

A. M. Edelman was the original architect for the Casino Theatre, as noted in the August 9, 1903, issue of the Sunday Herald: