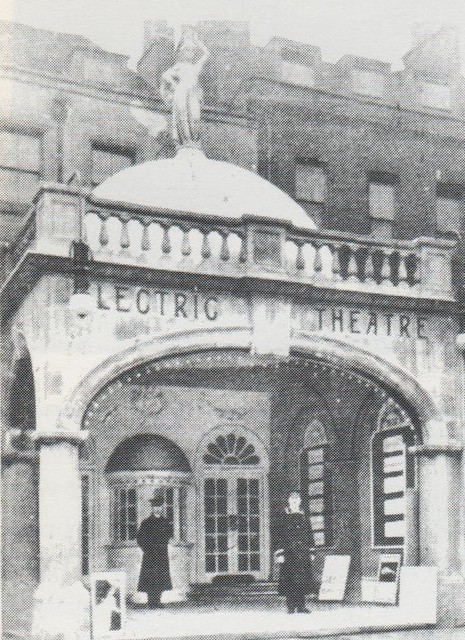 Located in the north London inner-city district of Islington. The Electric Theatre opened on 6th February 1909. It was a purpose built brick building which replaced a wooden shop front, and was designed by architect Melville S. Ward. It was operated by Electric Theatres(1908) Ltd. who were the first company to establish a chain of cinemas around London.

Externally, the building had a single floor outer vestibule section which had a domed roof. On top of the dome is mounted a female figure holding a lighted torch. Behind this was a foyer located within a row of two storey terrace houses through which the entrance was made to the single storey auditorium, which runs behind. Seating was on one floor with no balcony.

Competition was fierce from the nearby Empress Electric Theatre(1910) (today operating as the Screen on the Green) and the Angel Picture Theatre (later Odeon) which opened in 1913. The Electric Theatre closed in the summer of 1916 and became ‘North’s Automatic Exhibition’ for a while.

It was in use as Dome Antiques for many years, the outer versibule had been enclosed. In 2007 it was in use as a clothing shop named Blacks. The exterior remains practically the same as it did almost 100 years ago when it first opened as a cinema. By 2017 it was a branch of Cafe Nero.

It is a Grade II Listed building.