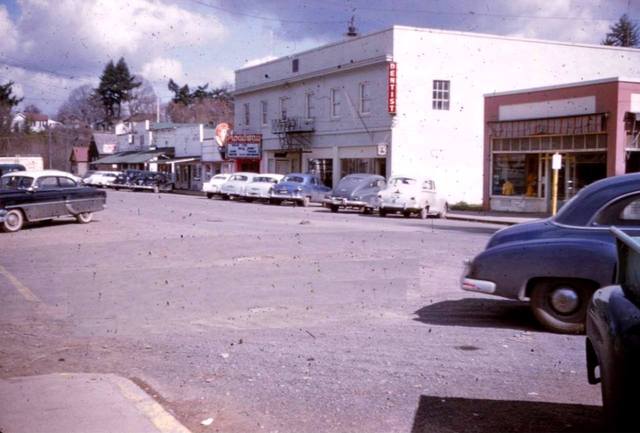 Located on S. Broadway Street by 4th Avenue in Estacada. I spoke with the helpful "Frank" at the local Chevron FoodMart and he told me that the theater had been popular in the early/mid-1960’s. The theater closed in the early-1970’s when the owner decided to close it and retire.

Frank recalled that the first film he saw there as a kid was Elvis Presley in "Kissin' Cousins".

I asked Frank the name of the theater and he told me it was just the Estacada Theater.

A young co-worker of Frank’s thought that there had been a fire there at one time, but Frank shook his head "Nope, no fire".

“Mason Building up for sale… When the Estacada Lodge No. 146 built the Mason Building on Broadway in 1924, it was built with a common model in mind: to create a meeting temple on the second level, and subsidize costs by leasing street level space. Also included in the building was a theater, located on the east side.

Over the years, the retail spaces have been home to a wide variety of businesses, including Safeway, the Forest Service, a bank, Harmony Baking Company, doctors and dentists, and currently a deli and antique store.

The theater was in operation until the early 1980s. After it closed, the Masons acquired some of the theater chairs. They are in the temple, still. The theater space was then used for storage space, until it collapsed in 1995. That portion of the building was then torn down and the space replaced with a parking lot."

So perhaps, before the Estacada theaterâ€"which Frank seemed to be saying was open from from the mid-‘60s to mid-'70sâ€"possibly it was the Esta theater, and then later still, up until the early 1980s, it was a different theater (or at least owner, after the Estacada guy retired) altogether…

I just happened to be passing through Estacada after a hike so I only spoke to one person really who remembered the theater. If there’s a reader out there in Estacada who wants to ask around some of the local shops, we might be able to get a much clearer idea.

I just added an early `50’s photo of the Estacada as the Broadway Theater. The building is identical to the present day Google view that disappeared when I added what is now the first photo. Broadway should be added as another name to the Estacada description. (I also misspelled Estacada with a “c” in my description with the photo.)

The records of architect Day Walter Hilborn include a project for the Estacada Theatre, but no date is given for it.