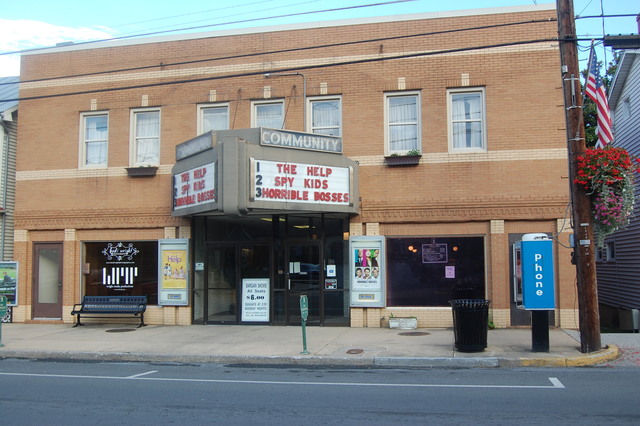 The Community Theatre was built in 1940 and operated by the Dalke’s Valley Theaters chain, based in Woodstock, VA. It was tripled in the 1970’s.

Dalke’s Valley Theaters was a chain that operated out of Woodstock, VA in the early seventies. William Dalke was the owner. Dalke’s ran the Community at that time along with several other Virginia theaters.

The Community Theatre is a wonderful gem in a idealic community. Although some minor renovations have been made to the structure (e.g. enclosing of the balcony and building on a additional room to add two screens) the theatre remains intact and lovingly cared for. Great city to visit and great place to see a show. Photos from August 2008: 1, 2, 3, 4

This theater was built in 1940 by William Dalke. As Ken noted, the Dalke family owned several other theaters in the county. The additional auditoriums were added in the ‘70s or '80s. Although most of the Dalke chain fell victim to TV and larger theaters in nearby cities, this theater apparently never closed, and was sold in 2008 to the Garman family. The current marquee appears to be the remains of the original, which had a tall blade on top.