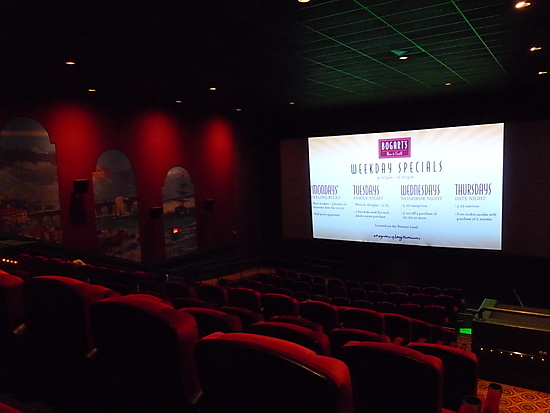 Theater opened September 14, 2007 with 18- screens and 4,227-seats. It’s really trying to be different! Every auditorium is digital and had art/murals on the walls (it reminded me of the old Coral Theater in Oak Lawn).

What really sets it apart is the Premier VIP area. There are six screens upstairs (it has a separate entrance) with seats almost twice the size of regular theater seats (they’re huge!). When you buy your ticket, you select your seat on a touchscreen (capacity is 60). Premier VIP ticketbuyers see the same film as the ‘regular’ patrons, but it’s in a balcony up above (who has balconies anymore?!) Plus, with the Premier VIP ticket, you get free popcorn (average, unfortunately) and free valet parking (although it’s next to a huge parking garage, so I guess the only time you’d need that would be if they had a big convention in town).

The food menu was expanded (not the typical movie theater fare - flatbread pizza, anyone?), but I don’t know if the ‘regs’ get the same menu. Premier VIPers also can order from Bogart’s restaurant, a sitdown place between the VIP theatres. There’s a bar up there, too. And get this - childcare services are available, also! (They had a lot of staff up there. I mean, a lot!) The men’s room only had one stall, but it included a sink! Which encouraged me to take as long as I wanted in there. Ha! Premier VIP is $15.00 Friday-Saturday-Sunday, $12.50 Monday-Thursday (and includes popcorn and valet parking).

The address is 9701 Bryn Mawr Avenue in Rosemont, but don’t use the mapsites to find it. They give the location as west of the highway, but it’s east. From the north, take River Road to Bryn Mawr and turn right. Past the office building (Hey! I used to work in that building!), turn left and head for the garage. From the south, turn left on Balmoral (where the Rosemont Theatre is), drive past the hotel, then turn right into the parking garage entrance. The theater is on the other side of the garage.

Rosemont is supposed to be bulding an entertainment district ‘Rosemont Walk’, but I didn’t see it. They only have this super-cool theater back behind the office buildings, hotels and parking garages that define this next to O'Hare Airport town.

Crowd was a decent size for a brand new, practically hidden theater. They must be counting on hotel guests. But hey, it’s worth the trip! Saw “Across The Universe” there, which is only playing at a few theaters. Also, you can print tickets at home.

In November 2019 the number of screens was reduded to 12, and the seating capacity was reduced.

“‘MuviXL’ is our giant screen format and will feature the largest and only MuviXL Bright White Screen that is over 72 feet diagonal, two 4K projectors with RealD XL 3D technology, and Dolby Digital 7.1 sound.”

is this the screen that is getting the new DTS-X sound system or is that another auditorium in the complex?

Nice theatre. I hope the new owners do well.

I went to one AMC Dine-in theater and it was terrible. People chewing and talking about the food. Waiters coming and going. And the sound was so loud trying to drown it all out!!! A crazy idea I think!

Passed the theater yesterday. AMC sign replaced Muvico 18 facing tollway. but was surprised to see the beautiful blade sign removed entirely…I am hoping it was sent somewhere to be changed from Muvico 18 to Rosemont and re-bulbed. But AMC is not known for splashy signage. So we’ll see!

This theatre is near the O'Hare International Airport

Not only the beautiful blade sign is gone, AMC must not like spending money to re-bulb the marquee. Half of the many light bulbs burned out. Looks like they are waiting for the rest to go so they can leave it off. Terrible!

Thanks DavidZornig for link. I miss that blade sign at night driving by. A real throwback to movie palaces of yesteryear! I bet the marquee will be re-done because they seem to have no interest to re-bulb the many burned out bulbs. With so many led lights today that actually shine as bright and surely last much longer than traditional bulbs you would think they would look into it.

AMC Rosemont has now been reduced to 12 screens. Recliners are being installed, greatly reducing the capacity. It appears that the upstairs premiere tier is being integrated to regular seating. DBOX has been eliminated. This was my preferred theater, but I don’t like recliners, it makes it much harder to get a good seat and reduces the audience effect. I’ll be going to Golf Mill more now.