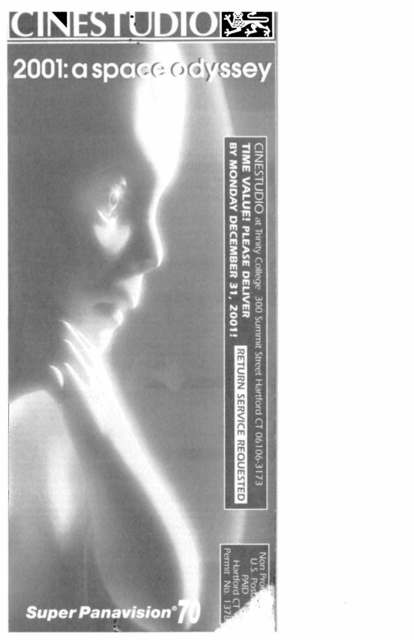 Playing a mix of classic, second run and art house films, Cinestudio isn’t a historic movie palace, but it is a mini-treasure that recalls a more dignified era of film going that has vanished from Hartford.

Now celebrating its thirty year anniversary, Cinestudio is still showing film in an area where only megaplexes, if anything, seem to flourish.

They’re prob the only place I know in CT that shows Anime. Saw the Cowboy Bebop movie here, only place in the state that got it I think.

I am an alumnus of Trinity College (1970) and, with James Hanley, a co-founder of CineStudio. I’m immensely gratified to hear that it’s still the premiere venue we were determined to make it (and with no help, I might add, from the administration).

The style is 1920s Collegiate Gothic, which means oak wainscotting everywhere, solid oak doors, and real brass fittings. Twin spiral staircases illuminated by skylights take one down from the balcony foyer (it is partly underground) to the Orchestra level.Originally there was a Hammond electronic organ, complete with gothic-styled console, in the balcony. Honest!

Why a chemistry lecture hall was equipped with an organ, or, for that matter, a state of the art 1930-vintage projection booth with twin Simplex projectors is anybody’s guess.

Daytime patrons may notice a large ground-level window around the corner to the left of the entrance. This originally illuminated the balcony and was equipped with a steel shutter which, when activated by a switch near the lower front exit door in the auditorium, clanked, yes “clanked”, upwards to cover it. One Spring evening in 1970 yours truly, while introducing the Saturday midnight horror movie, flipped the switch for the last time. Once closed the chain popped and they, as I hastened to remind them, were truly a “captive audience”.

Those were the days.

Two years late…but an explanation for the bad sound on print we showed of THE LEOPARD… Alas, the soundtrack had been recorded incorrectly on the print, with the curve so far off that it sounded terrible in mono or stereo. Not only that, the track was printed misaligned as well! We decided to run in mono because of the level of noise that made things worse in stereo. There was no other print available for our date. We take the greatest care to have the highest quality sound at Cinestudio, so we were very upset too.
James Hanley, Cinestudio.

Ah, as I was saying.

We did, on the other hand, have a first-rate faculty advisor for the Trinity Film Society, Larry Stires, God bless him! I can remember during that first season we ran, for some unaccountable reason, a B&W print of Alexander Korda’s “The Thief of Bagdad”, and periodically throughout it, Larry would exclaim, “Ah, but you should see this in Technicolor!”

Although I live roughly 2 hours east of Hartford, CT (just outside Boston, MA), and have never been there, I looked at the website and it looks like a beautiful theatre. I’m planning to drive down there sometime during the 2nd weekend of August, to take in a screening of West Side Story, because I always like to see that one on a great big, wide movie theatre screen, with the lights down low.

Yes, I did make the drive down to Hartford, CT., for yet another viewing of my alltime favorite film, West Side Story, at the CineStudio Theatre. I found Trinity College campus to be a very pretty campus, and the people friendly, although a number of the nearby neighborhoods of Hartford, CT, seem kind of run-down and not so great.

Saturday, August 9th, was sunshiny and cool, perfect for making the scenic drive down there, although I lost almost an hour when I got stuck in some awful traffic prior to and while approaching the pay tolls at the I-84 exit. Once I was on I-84 itself, however, there was no more trouble, and t he rest of the trip down to Hartford, CT went smoothly. Arriving at the Trinity College campus at around six o'clock that evening (I’d left Boston at 3 that afternoon), I explored the rather verdant, pleasant -looking campus for awhile, and then, at the suggestion of a campus employee there whom I’d asked where I could get something to eat, I walked to a small restaurant on the nearest intersect ing street, ordered a huge salad with mozzarella cheese with ham, walked back to the campus and the theatre, and ate as much of the super-huge salad as I could without overstuffing my self. As much as I love the film West Side Story, I didn’t want to see the movie (or any movie, for that matter) on an empty stomach, and I was hungry. While waiting to be let into the theatre, I talked to some people who were also going in for the film. One guy I talked to, who lived in a town 40 mnutes away from Trinity College, said that he’d been to and knew a bunch of the same movie theatres that I know and often frequent, since he often went to different places on vacation. He and his partner help run the CineStudio Theatre, and they ’d tried to book the brand-new 70mm print of the film West Side Story that just came out, but San Francisco’s Castro Theatre, which is also supposed to be a beautiful theatre was booked to play that print of WSS So they showed the 35-mm print, which was just as beautiful, although it would also be cool to view the new 70-mm print of West Side Story. Hopefully, maybe someday, that’ll happen.

When I told the guy that WSS is my alltime favorite film and that I’d driven down from Massachusetts to see it, he was interested in how I’d come to like this great classic so much. As is always the case, I didn’t hesitate t o relate how I’d been introduced to West Side Story as a musical generally, and how I’d come to love the music, and, later, as a high school Senior, the film. At a little after seven p. m., the theatre opened for the 7:30 screening. I went and took a seat in the balcony of the theatre, which, imho, is the best p lace to view a film such as West Side Story. After some rather u nnerving previews of other coming film attractions, WSS finally started. (Somehow, I’ve begun to think more and more that the previews are put in there for the benefit of late stragglers, so they won’t end up missing any of the feature film presentation. If so, that’s good, imho.)

The CineStudio Theatre seemed to be another epitome of a nice old movie palace of a threatre, with a shirred curtain over the screen, and a 50-foot wide screen that was slightly concave, if one gets the drift. This is a wonderful feature to have for such classic films as West Side Story, because it brings out the richness in such films. As always, (whenever I attend a screening of WSS), I noticed things that I hadn’t really noticed before on viewing the film. The various facial expressions of sorrow, exuberance, frustration, anger, arrogance and hubris, recklessness and combativeness among the gangs and more noticeable among the Jets, were far more noticeable than before, and especially during the Dance at the Gym scene, there seemed to be whole families with small kids watching from the sidelines while the Jets & Sharks danced in competition with each other. The adults, especially Doc, the Candy Store owner, but including Lt. Schrank, Ofcr. Krupke, and social worker,
“Glad Hand”, seemed more frustrated, nervous and sorrowful over what was coming and what ultimately did come. The grittiness and anger of the kids' faces before and after the rumble, as well as their facial expressions were more noticeable. This great film classic is clearly about teens and/or young adults who live in an urban area, and the slightly concaved screen seemed to accentuate the city scenery.

At about a quarter past ten that night, the screening of WSS ended, and I drove home, which took only a little bit over 2 hours, due to no delays.

I was very glad I’d gone—the trip was worth it.

I also might add that it warms me all over to see the CineStudio as one of the featured theatres of this already-wonderful site. Thanks.

Good story in the Courant about “go digital or go dark” in relation to the Pleasant Valley Drive-In. This theater among others in the state are mentioned.