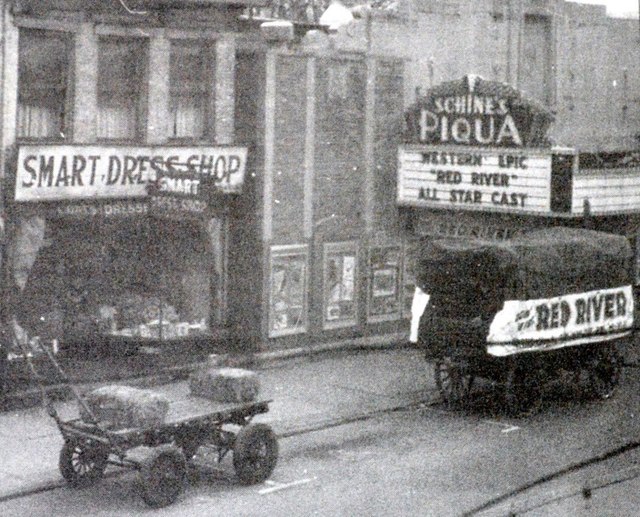 My great aunts played at Mays Piqua Theatre in March, 1929. They were vaudevillians. I don’t know if this is the same theatre.

The Piqua Theatre was bought by Chakeres Theatres in 1969 and completely remodeled that year. The Piqua Cinema was the subject of an article in Boxoffice of January 12, 1970. There are five photos. Unfortunately the article says nothing of the theater’s history other than that it was once operated by Schine and then by the Panther organization.

A vanished e-Bay item turned up in Google search (but without a cache unfortunately) was listed as “Milady’s Style Parade and Recipe Book for 1935 with Photos of Favorite Movie Stars-Compliments of Schine’s Piqua Theatre-Piqua, Ohio”, so the house is at least that old.

Piqua was the home town of the singing group the Mills Brothers, and this web page says that they made their first public appearance in an amateur show at May’s Opera House in Piqua. The Schine circuit also once operated a 711-seat house in Piqua called the Miami Theatre, and it appears that it was the Miami, not the Piqua, which had once been May’s Opera House, and the renaming apparently took place by 1934. Schine operated the Miami at least as late as 1957. I’ve been unable to discover what became of it after that.

Another interesting thing the Internet reveals about Piqua is that ca.1915-1917 there was a movie house there called the Favorite Theatre which, in collaboration with a local druggist named George Kiefer, issued a series of trading cards featuring photos of the movie stars of the day.

I don’t think that the Piqua Cinema has been demolished. The parking lot side of the building occupied by Readmore’s Hallmark Shop (430 N. Main St.) has the same stair-step pattern in the brick that the wall of the theater has in the American Classic Images photo Chuck linked to in the first comment.

If you move Street View to the Greene Street side of the Hallmark shop, there is a back door to the alley that looks like a theater’s emergency exit. The decorative brickwork on the Main Street facade might be recent, with a retro style, or it might be the original brickwork of the theater, uncovered and restored when the 1969 aluminum false front in the ACI photo was removed.

Unfortunately, the 1970 Boxoffice article about the remodeling of the Piqua Theatre (fresh link here) doesn’t have a “before” photo of the theater. The current facade certainly has a very theater-like configuration, though, as does the whole building, and its style is certainly very 1920s, though I think the parapet is probably a re-creation rather than original, which was probably lost in the 1969 remodeling.

This house opened on September 23, 1929, as the Ohio Theatre. An article in the August 29, 1970, issue of The Piqua Daily Call features an article about John Hixson, who says that he was one of the projectionists when the house opened.

The May 22, 1931, issue of the Call says that Schine’s Piqua Theatre, formerly the Ohio Theatre, would have its formal opening that night.

Per Frank Chaney: “I was told by a sales clerk that the store occupies only what used to be the lobby and concession area. The theater space is behind and above it and is used partly for storage, but mostly it’s just empty.”

This link documents several other theatres in Piqua. I am adding a page for the Bijou, and will research the others. Missing from their list is the Royal and Star Theatres.