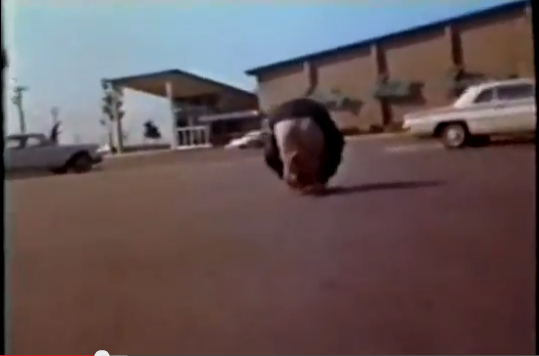 This was a big, beautiful modern theatre built in the 1960’s. The Rolling Hills Theatre opened October 2, 1963 with Shirley Jones and Gig Young in “A Ticklish Affair”. The two stars of the movie appeared ‘in person’ as well as other film stars Troy Donahue, Suzanne Pleshette, Helen Greco and Spike Jones plus other personalities attended.

The building was a distinctive design, entering the lobby, then making a hard right to enter the auditorium. The roof of the building slanted upwards, higher as it extended to the back of the building.

The theatre had a huge screen and is believed to have been run by Pacific Theatres.

The Rolling Hills also has a very sad history:

One morning in the early-1970’s the projectionist failed to return home and the police were called. Once inside, the bodies of the projectionist, Asst. Manager and two other employees were found in the manager’s office, on the floor, tied and murdered execution style. The safe was open so the killers had already gotten the day’s receipts. A Disney double feature played that evening. The Manager, who was off that night, was so upset he converted the stockroom to an office and never used the other one again. The Daily Breeze ran photos of the bodies being taken out on gurneys. This was the beginning of the end.

On May 28, 1975 the theatre was twinned, and then later closed. The building still stands, now housing a restaurant.

David, thank you so much for the link! The photos and ad are awesome. I remember the lobby like it was yesterday…

I also added a 1975 pic to the Photos Section. Skateboarders lined up in front of the old marquee. Though it’s hard to see,

My father was a projectionist there. He had taken that night off…..

When my family first moved to California in 1967, we briefly lived at the Torrance Inn next to the mall where the Rolling Hills Theater was located. I was 2 years old, and my brother and sister were 5 and 6. We can all remember a park next to the mall there (probably where an auto dealer sits now). Our mother would leave us at the park and go to the mall to work at a shoe store there, and also to do laundry at the laundromat. Does anyone remember the park there? Our mom says that there was a lady there that she would pay a few dollars to watch us but we all remember being there alone for hours. Later we moved up the hill to Palos Verdes where we lived until ‘73. I can remember going to movies at the theater, and especially remembered it after I saw the photos of the lobby. In later years whenever we would drive by there my sister would talk about the murders. What boggles my mind is that the Torrance Inn is still standing. I’ve heard it’s quite the drug zone. I can remember a fire in the building when I was there with my mom and all the fire trucks coming. Pretty good memory for a two-year old! I also remember somewhat the inside of our apartment there.

Dear ediegold, my father filled in for your dad that night. Clyde Felts. I hope your father never felt bad about that night, Clyde was dying from a ballooned heart, several massive heart attacks and wasn’t expected to live much longer. They said they didn’t know if he would have lasted another month. If it had to be one of them, I’m sure my Dad would have gave his life. He was a good man. Big Hugs, Marissa

Marissa, my heart goes out to you and your family. I was one of those little kids of the ‘60s that your dad helped bring so much joy to over SO MANY Saturday matinees. Hollering out, “Hi Clyde!” Up to the booth before the first reels played…such a bittersweet memory now, but know that he is, indeed, remembered fondly. Love and peace, Kim

Marissa I know this was a long time ago, but I’m so sorry this had to happen to your father, whether he was in poor health or not, no one should die that way…

On that note, I’m looking for any information anyone would have on the man accused of these murders John Roy Maheu Jr.

He was my dads half brother and I was 3 years old when this happened. I’ve been scouring the web and newspaper sites looking for more information, but there doesn’t seem to be a lot available. I saw one comment where it was known underground that Torrance PD killed him and labeled it an overdose. My dad never believed he died of an overdose. He’s the one who claimed his body and said it looked like he was beat to death. I remember all the newspaper clippings that my dad kept but they have somehow gotten lost over the years. Anything anyone might have about this to point me in the right direction would be much appreciated.