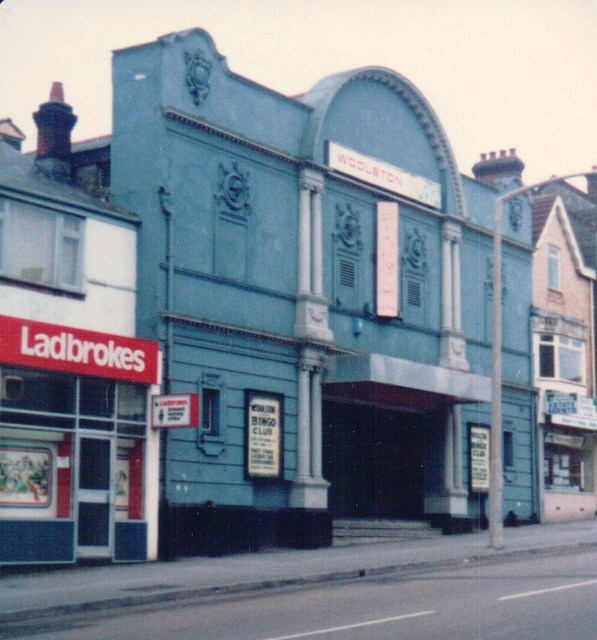 Just up the hill from the Floating Bridge, which connects Woolston to Southampton, is the the second of many purpose-built Southampton cinemas which survived heavy bombing in the second world war. Today’s passengers crossing the river can still clearly see the cinema’s name painted high up on the roof.

The facade’s decorated roundels reflect the heads of famous British icons; Bacon, Shakespeare, (Queen) Britannia and others. The ceiling has slightly rounded arches with decorative plaster moulds while lions once sat atop pillars on each side of the stage gazing down at the audience. Built in 1912, this family cinema offered continuous daily performances and special Saturday morning shows for kids until 1973, when Disney’s "The Worlds Greatest Athlete" was the final film to be screened.

Earlier, by 1934 it had been equipped with a Cinephone sound system and was operated by Union Cinema Co. Ltd. In 1957, Harry Mears purchased the Woolston Picture Theatre and spruced up the place by removing some front seating and installing a new CinemaScope screen. The circle had some double seats, for lovers, as did the back row in the stalls. The ever-popular game of bingo saved this historic cinema from a fateful end for many years, operating as the Bew Century Bingo Club. It was closed and shuttered from October 2007. The auditorium was demolished and flats were built on the site in March 2019. The façade survives intact, still with its New Century Bingo Club signage in 2020.

Currently being converted into flats. Photo taken at the rear in Oakbank Road uploaded under the photo tab