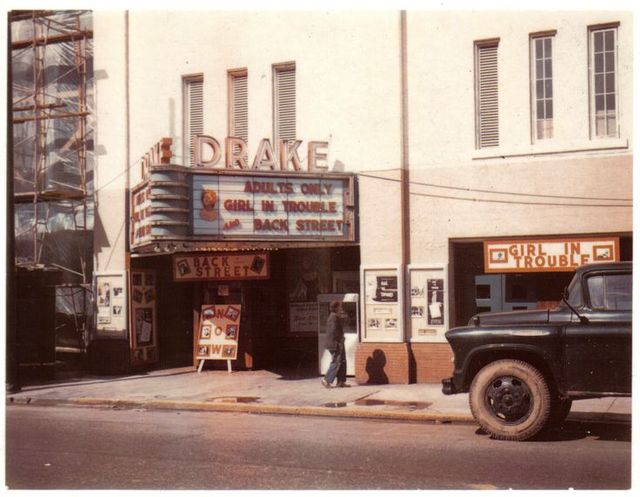 The Carolina Theatre was opened around 1930. The Drake Theatre is first listed under this name in the 1943 edition of Film Daily Yearbook.

It was a true grindhouse and may have been the only true grindhouse in the state of North Carolina when I knew the Drake Theatre from the early-1960’s into the early-1970’s. The theatre opened daily at 10:45am and at 12:45 on Sundays. In 1965 admission was 60 cents for adults and 25 cents for children. Within a year or two, adult admission was $1.00. The Drake Theatre had a balcony, and for a couple of years, they offered a reduced admission for balcony seating. Almost all programs were double features.

The Drake Theatre was part of the Charlotte, NC based Stewart and Everett Theatres. That company operated many upscale and high profile theatres in both Carolinas, as well as many drive-ins. The Drake Theatre was unique; bookings there were like a New York City 42nd Street grindhouse.

The Drake Theatre ventured into risque fare in the early to mid-1960’s; however, many programs remained suitable for children. I particularly remember the Drake Theatre showing many of the Mondo movies and many Russ Meyer films. A few of the double bills that I remember are Russ Meyer’s “The Immoral Mr. Teas” with “Mondo Topless”, “Moonlighting Wives” with Newman and Woodward’s “A New Kind of Love”, “Promises, Promises” with “3 Nuts In Search of A Bolt”, Meyer’s “Mudhoney” and “Motor Psycho”. There were also double bills of western, horror/gore, sci-fi films. Many were obscure B-grade films.

I left for college that year and did not return to Wilson until the early-1970’s and I wanted to revisit the Drake Theatre. It was playing a single feature of “101 Acts of Love”. The theatre now opened at 12:45 daily. This movie had been at the Drake for several weeks, yet there were over 100 people attending a weekday 1 PM showing, although “101 Acts of Love” was not true hardcore fare. That was my last visit to the Drake Theatre. I understand that hardcore XXX-rated films soon followed. I do not know when the Drake Theatre finally closed. I expect that it followed the trend of adult theatre closings in the advent of video.

Wilson, NC is an eastern North Carolina town. In the mid-1960’s the population was less than 30,000, and the economy was centered on growing and selling tobacco. It has always seemed to me that this Southern tobacco town was an unlikely location for a grindhouse. After all, Charlotte, Raleigh, Greensboro, and Winston-Salem had no theatre remotely similar to the Drake Theatre.

I just read online that there is a planned historic renovation of the Drake Theatre. Way to go!

If you go the the listings for the DRAKE CINEMA, PLYMOUTH, ENGLAND, you’ll see your cousin’s namesake. This was under the Odeon chain and had the most interesting of facades; a huge Galleon under full sail.
Stationed in this wonderful port city with the Royal Navy, I cannot tell you how much I enjoyed watching movies in their on a lousy, cold, wet, summers day!

Here is another photo, undated, of The Drake. Probably mid-late 1960s. View link

My father was the manager of the Drake in the 1960’s. My first job was as popcorn boy for the Center and Drake theaters. *The Drake was always The Drake theater..The Carolina theater was on Goldsboro Street and eventually became The Colony Theater.

I have looked at LostMemory’s and Chuck1231’s links regarding a “Carolina Theatre” in Wilson and it seems that Wilson had two different Carolina Theatres. LostMemory’s link shows a photo of the 1930 Carolina Theatre along with photos of the Drake Theatre. The Drake and the 1930 Carolina appear to be the same theatre. Chuck1231’s link shows the plans for a 1939 Carolina Theatre (the Goldsboro Street theater later renamed the Colony Theatre). Apparently Wilby-Kincey built the new Carolina in 1939 and remodeled the old Carolina about the same time, renaming the latter the Drake. The Carolina/Colony Theatre has been demolished while the Carolina/Drake Theatre still stands.

The Drake Theatre closed in the mid-1970s, about the same time as the opening of the Gold Park Twin cinemas.

The recent opening of A. J. Price’s Carolina Theatre, which later became the Drake Theatre, was noted in the June 2, 1930, issue of The Film Daily.