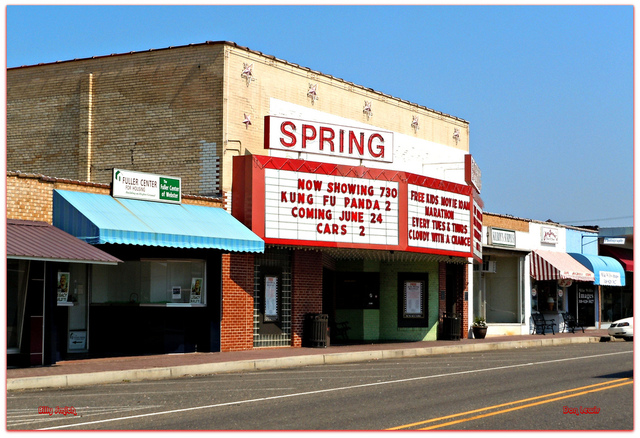 "Inside, bats and mold decorated dirty curtained walls, fallen acoustic tiles and mud," according to a September 10, 2007 article in the Shreveport Times.

After a tireless $100,000 renovation, the theatre was reopened on September 20, 2002. Today, it remains a popular local attraction with affordable prices.

This is my favorite place to watch a movie. Great sound, clean, cool, and simple. Reminds me of my hometown theater which is long gone. Would rather drive 45 minutes to this small town theater than 30 to a large cinemaplex. It’s off the beaten path but definitely a “must-try”.

A 1948 construction date means that this must be the Springhill house noted in the May 8 issue of Boxoffice that year. It was originally to be called the Orleans Theatre, and was built for B. R. McLendon’s Tri-States Theatres. It was designed by Dallas architect Raymond F. Smith. The item, which mentioned several theater projects that were then at various stages of planning or construction, said that the Orleans had “just started.” I’ve been unable to discover if it opened under the name originally announced or as the Spring.