The Atlanta Theatre was built by Joel Hurt and was located at 23 Exchange Place (which no longer exists) across from the Hurt Office Building and east of Five Points.

The theatre opened on September 11th 1911, with the play “The Sign of the Rose”. Designed by Haralson Bleckley, the style was Art Nouveau and seated 1,700, and had two balconies. The theatre was operated by Klaw and Erlanger.

Although the Atlanta Theatre opened as a legitimate theatre and many of the brightest stage stars of the day appeared on its stage, it was not too long before Klaw and Erlanger started booking films in the theatre.

Many of the major silent films of the 1910’s & 1920’s made their first appearance in the city at the Atlanta Theatre usually with a touring orchestra and reserve seating, with tickets up to $2.00. The most famous (or infamous) film to appear at the Atlanta Theatre was D.W. Griffith’s “Birth of a Nation”, in 1913 which ran for almost six weeks with mostly sold out performances,(this was very rare in a time where films usualy ran for only a week)

The Atlanta Theatre did well through the early-1920’s when it began to face stiff compition from newer theatres such as the Howard, Keith’s Georgia, and the soon-to-be-opened Capitol.

After Klaw and Erlanger left the Atlanta Theatre, bookings were slow and soon became a place for trade shows and wrestling matches, then finally burlesque, known as the Derby Show. During its burlesque era its best known star was a pudgy blonde girl by the name of “Snookie Woods”. She was one of the early bump and grind strippers. The local authorities made her quit the bumping and grinding but she kept on stripping and was about the only thing to keep the theatre open in its later years.

It was taken over by Joy’s Theatres Inc. of New Orleans and became a movie theatre named Joy’s Theatre on June 19, 1940 with Jackie Cooper in “Boy of the Street” & Gene Autry in “Western Jamberee”. It was closed in August 1943.

The theatre was torn down in the summer of 1954 and was replaced by a parking garage.

Over the weekend, I saw a picture of the Hurt Building from the 1950’s and you could see what looked like an old movie theater across the street. I believe this is the old Atlanta Theater. It has a small one story facade and a rather large auditorium. There is also a tall thin building at the corner which I remember being demolished when I attended Grad School at Georgia State.

What a shame when this venue was open, Georgia State was only in the building known as Kell Hall. Had this venue still been standing, it could have been used instead of the Rialto.

Thank you, John! What a fascinating piece of Atlanta history! It demonstrates the fact that as the city developed, theaters came and went. They faced competition from other theaters. Neighborhoods changed; the economy changed; real estate values changed; and, most of all, the times changed.

The original release of BIRTH OF A NATION predated my father’s time. He remembered a burlesque house in Atlanta, but maintained that he never attended it (not that I doubt it). Theaters like The Criterion, The Forsyth, and The Metropolitan were long gone well before my time. Yet, it brings a sense of proportion about the theaters that I knew which were demolished in my time. It makes the survival of The Fox, and other vintage Atlanta movie houses all the more remarkable!

Here’s a link to a photo of the original ATLANTA THEATRE:
View link 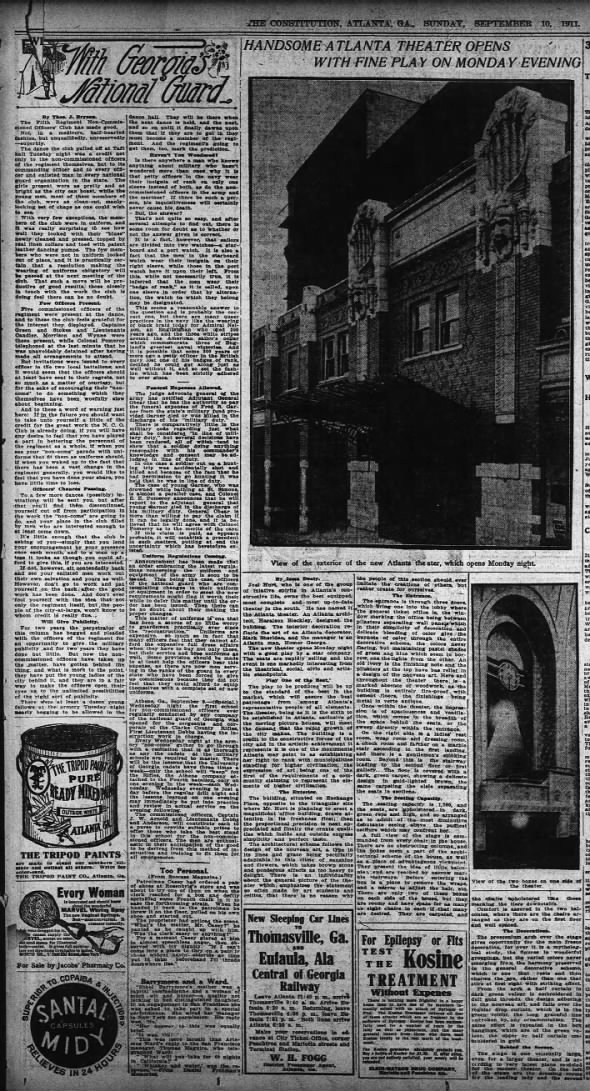