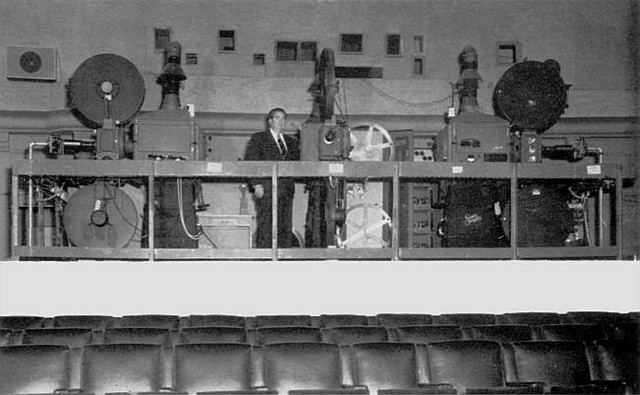 Their third theatre was Jensen’s Melrose Theatre, opened in 1924. Designed as ‘a better class’ neighborhood movie theatre, specifically for movies, it has no stage house. The silent movies were accompanied by a Link 2 manual, 4 rank theatre organ and a ten-piece orchestra. The external brickwork is of a very high standard, even the side walls of the parade of shops adjoining the theatre and the theatre’s facade are covered in very high quality terra-cotta tiling, the name of the theatre is shown in the tile-work across the top of the facade.

It was managed for many years by Fox West Coast Theatres and during the mid-1950’s it was here at the Melrose Theatre where Russell McCullough developed his Cinemiracle, 3-strip widescreen process. This was a cheaper, and actually superior, form of the 3-projection system to rival the Cinerama system, but only one movie was ever made in Cinemiracle. This was “Windjammer” which premiered at Grauman’s Chinese Theatre, Hollywood in 1958. The Cinerama Company saw Cinemiracle as a competitor to their own system and they ‘bought out’ the Cinemiracle process and shelved it.

The Melrose Theatre closed in 1959 and it was purchased by the Ukrainian Cultural Center, who transformed the building between 1959 and 1961 into their main Los Angeles headquarters, which officially opened on February 12, 1961.

The main orchestra floor has been leveled to allow for use as a dancing or banqueting space and the balcony and projection suite has been sealed off and converted into classrooms. The building is now in regular use for the community and money is raised by renting out the hall for dances and social events. It is well maintained and retains most of its original decorative features.

Ken is right. The facade’s style is a sort of Renaissance Revival-Baroque-Romanesque Revival pastiche, I’d say. Certainly not Art Deco. All the elements have clear historic roots in European classicism. Art Deco, even in its nascent form, was full of elements borrowed or abstracted from non-European styles and/or modern industrial technology.

As great-great-granddaughter of the architect, I’d like to note that the official spelling of his name is Elimar Meinardus (not ElimOr). He was a German immigrant, and his name was repeatedly misspelled (Elimor, Elmer, etc).

It was a Paramount ad.

No, that was the other ad. This one was for a firm that did interior design on a number of theaters.

amazingly no one seams to have a picture of this theatre when it had a marquee. it apperfs to have closed from showing films in the 50s.

This and the Los Felez Drive-In don’t seam to have any photos.

National Theatres used this theatre during the mid 50’s as a test theatre for their CineMiracle film process.

In January or February 1982 performance artist Johanna Went put on a show at the Ukrainian Cultural Center. I brought filmmaker Shirley Clarke (“The Connection,” “The Cool World”) to the event in order to introduce them. They subsequently made two short films, “Performance,” shot at UCLA, and “The Box.” Shirley died in 1997; Johanna is still working.

(Nov. 29, 1933 LA Times) PREVIEW FOR BENEFIT In addition to a feature preview being shown, Rosa Disraeli, lyric soprano, will sing several selections at the benefit theater party next Tuesday at 1:30 p.m. at the Melrose Theater, 4315 Melrose avenue, by Beth Jacob and the West Side Ladies' Auxiliary of Mr. Sinai Home for Chronic Invalids.

The Museum of Neon Art, soon to reopen in Glendale, has a few remnants of the Melrose Theater’s rooftop extravaganza. A few of its incandescent maidens made their way to the Museum of Neon Art’s collection and are currently on display with a few other museum signs at Universal CityWalk. They are the oldest pieces in the museum’s collection.