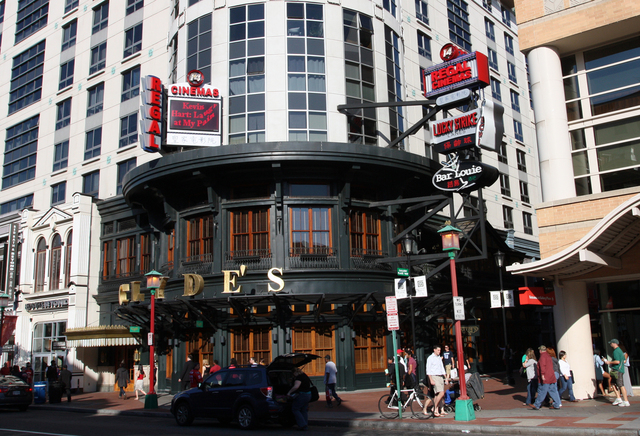 One entry to the shopping complex and movie theaters is off of Seventh Street and another entry is directly accessible from the MCI Center. The shopping center has 650,000 square feet, a huge atrium, and decoration includes Grecian-style columns and busts.

On the ground floor is the large stand alone ticket booth. Escalators go upstairs to the megaplex, which has 14 stadium seated auditoriums, luxury seats, and digital surround sound and takes up 63,000 square feet. The largest auditoriums seat 300 people. AMC had planned a 21 screener at this location, but the theater was opened by Regal instead. JKRoller Architects of Philadelphia, PA designed the Regal Gallery theatre.

Screen 8 (another one of the largest auditoriums/screens) got the digital conversion (‘Unstoppable’ is currently playing) – unfortunately the framing is off, it’s as if the projector wasn’t pulled all the way back, the 2.35 image was framed by black borders all around. Screen 8 also features a great soundsystem, The Ed Norton ‘Hulk’ was downright amazing and assaultive, tight bass and clean clear sound. ‘Unstoppable’ soundmix was equally as impressive! Management stated that screen #2 is also digital projection and that all the DP screens feature 7.1 sound.

Aha. Another comment of mine is missing from this theater!!! My friend used to work not far from here and one of the movies I remember seeing here was “Little Miss Sunshine” back in ‘06. The movie was thoroughly enjoyable to the eclectic crowd. What I also remember was a fierce argument that went out between this single (white) woman who was trying to politely tell another patron (African American) male to be quiet and not talk on the phone as the movie began. The man became belligerent and the racial epithets started …mind your own business. The woman hastily retreated and got a Manager involved, who basically did nothing.

In ‘07 I recall seeing a movie here, title I forgot now, but I’m sure I blogged about it here, and there were many Secret Service agents here milling about. As to whom they were watching over I never found out..I’m guessing it may have been one of the Bush kids as I’m sure the parents would rather watch a movie in their own auditorium at the WH.

There isn’t much to recommend this place given the above memories and experiences. The technical upgrades sound nice but this is a Regal, afterall. I’d rather go to a suburban venue then venture out here unless a movie I want to see is exclusively here.

All 14 screens are digital as of Tuesday, February 7.

has anyone been to the recently opened ‘4DX screen’ – sounds too gimmicky to me, but as I understand it, the audio is still standard 7.1 and not immersive: Atmos, DTS-X, or Auro ~ right?

I’ve been to other 4DX screens — never watched a full movie, just checked them out. Like DBox, they aren’t for me, distract me from the movie.