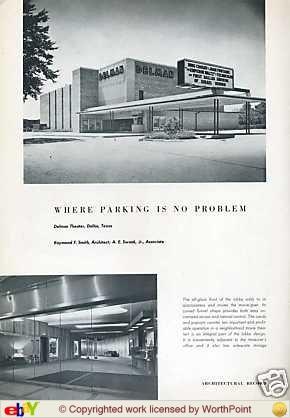 I knew Sallie! I worked at the Delman around 75-76. I worked the concession stand and later on was the asst mgr for a time. I remember she drove a huge white station wagon she called “Moby”.

How is she doing?

I think the Delman was the first indoor theater I went to as a kid! I think it was the original ‘101 Dalmations’. Saw many movies after that and always liked the place. I thought it became a spanish language theater toward the end?

An absolutely lovely theater – saw Spartacus here in its second run engagement in 1960 or ‘61; continued to visit occassionally over the years. Last time I was there was in 1972 or 73 for a second-run double-feature of Serpico and Save The Tiger – my God, after 3-4 hours of such cynicism, my date and I walked out utterly depressed! It was definitely time for some coffee & cheesecake at Phil’s Delicatessen on up around the corner. Glad they were open all nite!

Thank you all for posting these comments. My father, Isadore B. Adelman, owned and operated the Delman. It makes me smile to find these memories online. Again, thank you.

Susan, Your father would occasionally stop by. Very regal, sharp.

4826 Lemmon Ave. maps the Delman to have fronted on Lemmon – it was actually about a block off Lemmon at the intersection of King’s Rd. with Raleigh.

Go by the address listed in the ad (Lemmon at Raleigh) to find the building on HistoricAerials; unfortunately, that address will not map properly on GoogleMaps because, although Raleigh still exists as a roadbed, it is now a passageway through the parking lot of an auto dealership.

A new street, which cuts off from King’s Rd. at an angle to the original Raleigh, now carries that name.

I uploaded the grand opening ad in the photo section for this theatre.

The Isadore B. Adelman Theatre Circuit may have been most known for its indoor Delman theaters in Houston, Tulsa, and Dallas though he had theaters in Abilene, and Fort Worth (Tivoli) by the time the Delman opened on Sept. 26, 1947. Deanna Durbin’s “A Hundred Men and a Girl” launched the Delman. The theater’s address was 3319 Raleigh Street with 1,150 seats. The theater was community minded hosting high school events, allowing a church to hold sermons, and showed the annual Southwest Conference films featuring local college Southern Methodist University.

Almost immediately in 1947, Adelman sued Interstate and nine film studios for what amounted to collusion in obtaining rights to show pictures. Adleman complained that he was only able to gain access to feature films 40-to-52 days after their initial release and often he was allowed to run only third-run films. That suit was a $750,000 protest lost in 1953 when the court said there was no conspiracy and appealed. He also filed suit in 1948 a $2.4 million suit alleging that booking practices caused him to close three theaters in Houston. He won $20,000 in the first phase of that suit in 1955. At Christmas of 1967, the Delman battled General Cinema’s NorthPark with “Valley of the Dolls” v. “The Graduate” for box office supremacy with NorthPark winning that round with “The Graduate” selling more tickets.

When Loew’s entered Dallas with the Downtown theater, it soon purchased the Delman theaters in Houston, Tulsa and Dallas which was approved on Nov. 21, 1969. Loew’s spent $50,000 closing the theater for refurbishing in December re-opening early in 1970. The theater struck a chord with “The Last Picture Show” among other hits before Loews dropping the theater in 1978. After film exhibition was completed thereafter, the Delman became a disco and music nightclub in the 1980s prior to being demolished.

I’m a bit late to the party, but I just thought about the Delman and just found this site. I too worked at the Delman in 1968-1969, along with Jack Garland and several others. It was a cool theatre! My first job at 14. And I seem to remember mr. Adelman coming to town, and I think Mr. Swank. I remember going to school with a Swank, sorry I can’t remember his first name. Fond memories.

Hi, Steve (spthomas) !!! This is Jack. Hope you are doing well! You can reach me at . I live in the Houston area.