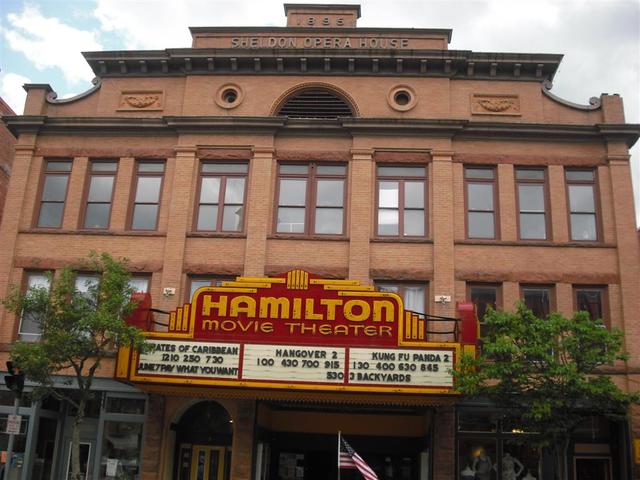 The Sheldon Opera House opened in 1895 as an opera house, and was eventually cineplexed.

In 2002 or 2003 it was purchased by Colgate College and resumed showing first-run films with occasional art, foreign or classic film screenings. In 2006 a new marquee was put on the theatre as a gift of the class of 1956.

Lost: I found my way here after visiting the Colgate University campus via the internet. A neighbor of mine is a graduate of Colgate and wears his school colors….proudly. Sorry to read that it is triplexed though was pleased to read that the Class of ‘56 contributed to the marquee project.

As the Sheldon Opera House, the Hamilton is listed in the 1897-98 edition of the Julius Cahn Official Theatrical Guide. E.B. Sheldon was the Mgr. The seating is given as 1,000 (probably rounded up).The proscenium opening was 30 feet wide and the stage was 30 feeet deep. The theatre was on the first floor. The local newspaper was the Hamilton Republican, a weekly. Hotels for show folk were the Hotel Moxwell and the Pock House. Railroad was the New York, Ontario and Western. The 1897 population of Hamilton was 2,000.

LM: Would love to see some interior photos of this theatre!

My neighbor may have graduated from the Class of 1956 so will have to ask if it was his class who donated the marquee.

This house was called the State Theatre until at least 1950. Prior to becoming the State, it was showing movies as Smalley’s Theatre from about 1918, according to an article in the Hamilton & Morrisville Tribune of May 10, 2006. The Schine circuit took over the house about 1934.

After acquiring the house from Smalley’s Theatres in 1934, the Schine circuit had this theater completely remodeled and renamed it the State Theatre. Two photos of the State illustrate this article in the June 1, 1935, issue of Motion Picture Herald. The plans for the project were by architect Peter M. Hulsken.