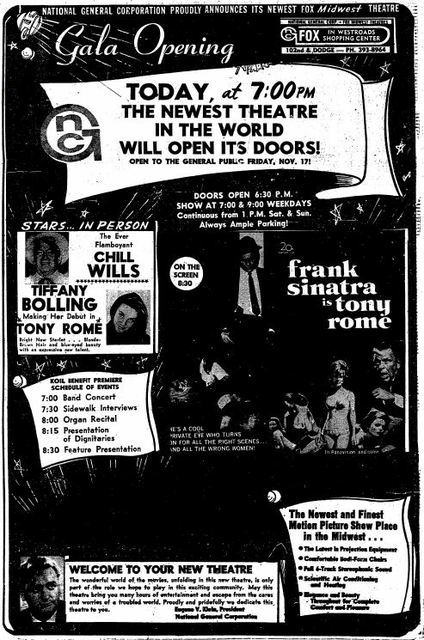 This started as a large single screen and was twinned in 1976. It screened first-run movies and was operated by Mann Theatres and National General Theatres.

They were in the same building. In fact they were butted up against each other. The six screen theater had an inside entrance about 50 feet inside. The twin had its own separate outside entrance about 20 feet to the right of the mall entrance to the other.

Interesting. thanks for the info. I have been trying to find More pics. I can not find any of the Fox. I had someone try to Show me where the Sixwest Entrance was inside the mall. But She sorta got confused with the changes the mall has done. She said something about a hallway along JC penny and Sixwest was basiclly a hole in the wall.

Found some info on the Fox Theater.

The Fox theaters were just north of JCPenney’s, where Dick’s Sporting Goods is now located. The Fox entrance was outside, and screens exited to the parking lot to the east, just north of Penney’s. To the west of Fox was the mall entrance, Boston Mall, which led to the Six West box office. Later, a small store was built north of AMC, housing a magic store and later selling t-shirts.

The Boston Mall hallway was AMC on the west, Fox and Penney’s on the east, and thus had nothing to see until you turned the corner, where Read All About It and Waldenbooks were located.

I saw the first Midnight premiere, Batman, there, as well as my first R-rated movie (The Fly). I also trekked through a snowstorm to see Disney’s Beauty and the Beast early Saturday morning. It had a newsreel!

Mann operated lots of theaters throughout Omaha, most of them a bit worn… I think most became 99-cent theaters before the discount chains moved in. (At one point, half of the screens in Omaha were discounted.)

245 and 264 Boston Mall, Westroads shopping center, 102nd Street and West Dodge Road, 397 – 6666. Eight screens, with six in one cluster with indoor entrances and two in another cluster with outdoor entrances. Tickets are $2 for showings that start before 6 p.m., otherwise $3.75 except $3.25 for students with an AMC Theaters discount card, $2 for those younger than 14 or older than 54. Matinees daily. Midnight movies on Friday and Saturday nights."

Well it looks like Dick’s Sporting goods took up the area where the Fox and Six West were. Thanks for the info.

@tinseltoes. Omg what a find. thanks for posting!!

My wife worked at the Fox Westroads when it first opened. She worked on Opening Night. Does anyone out there have any kind of ads (in addition to the ones shown on this site) or memorabilia that they could copy and forward to me? Respond here and I’ll contact you. Thanks.

I Might have a Photo for ya Modanco.I have to scan it first.