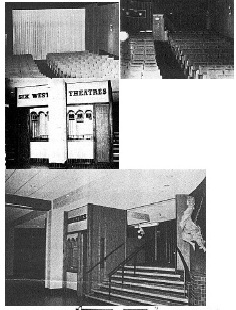 According to records, this was the first six screen cinema in the United States. It opened in 1969 and was located in the Westroads Mall. Operated by AMC it screened first-run movies and closed in 1999.

The Six West Theatres opened to on January 15, 1969, according to the announcement in the January 27 issue of Boxoffice Magazine.

Joe, you are slightly off, It opened on January 22nd, 1969. I have uploaded the grand opening ads, photo and an floor plan of the cinema. It had six bowling alley cinemas.

There was another theatre in this mall as well. National General built the Fox Westroads on the outside of the mall first, however someone in Los Angeles did not sign an exclusive contract for the Westroads Mall. The Fox was a single screen with AMC having 6 inside. Mann would later twin the Fox and when Dickinson bought out Mann’s interests in the Midwest they either closed the Fox or sold it to AMC. Today neither exist, Rave built a multiplex directly across the street from Westroads, and AMC has a megaplex in another part of Omaha.

Found some more info on the Sixwest Theater.

I grew up near 94th and Western Avenue, so the Westroads was where we hung out. When it opened, Westroads was billed as the eighth largest shopping center in the world. There was even a grocery store!

The Fox Twin was located outside, next to JCPenney’s. That site is now covered by Dick’s Sporting Goods. It was where I saw the first Midnight premiere screening, Batman. The theater exited around the corner, on the east, to the parking lot north of the JCPenney’s entrance.

To the west was the mall entrance, which was a long hallway with the “Boston Mall” address seen above. Since both sides of that hallway were taken by movie houses and a department store, there wasn’t much to see, aside from movie posters for the Six West theaters.

Directly north of the Six West was a small add-on store, which housed a magic store, and later a t-shirt store.

Everyone exited to the fire exits behind the screens, which shared common hallways. One exit was to the mall, next to the Waldenbooks store if memory serves.

The Six West hosted midnight screenings of “Rocky Horror”, which did not have costumed performers, just people throwing stuff at the screen.

A few summers, having eight screens to choose from, I would spend entire Fridays seeing multiple blockbusters, interspersed with lunch and playing video games at either JCPenney’s or Montgomery Wards (there was an arcade, but that cost money).

Six-West wasn’t a wonderful venue to see movies in- small theaters, and you could hear sounds from the movies playing next to you. Overpriced. But still, has a place in my teenage years, as I saw several movies there (Saturn 3, Prophecy, Cuba, among others) not to mention a midnight show here and there.