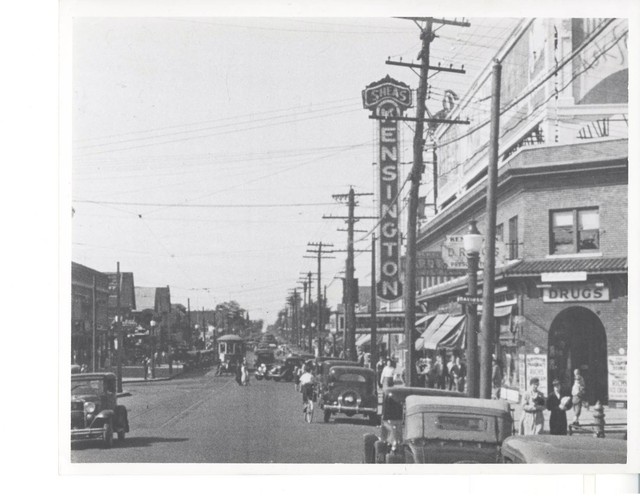 This is not to be confused with the Kensington Theater at 525 Grider Street in Buffalo. It opened December 25, 1926. It was destroyed by a huge explosion in the 1980’s.

This theatre was built as Shea’s Kensington theatre and should probably be listed that way to differentiate it from another Kensington theatre that existed on Grider St. It was one of the chain of theatres operated by Michael Shea and was located at the corner of Bailey Av and Kensington St. In it’s later years it was renamed the Oscar Micheaux theatre with a mix of live theatre and films. A mysterious explosion in the 80’s reputed to be from a natural gas leak destroyed most of the building. The entire building was then demolished. A strip plaza occupies the rear portion of the property today.

sam_e…
I knew one of the Kensington Theaters was a Shea’s, but I didn’t know which one. I was in hope that someone would know and fill that part in.
Thanks

“Ladies and Gentlemen, this is CINERAMA!” Lowell Thomas

The Kensington Theater at 3051 Bailey Ave. opened on Christmas Day, 1926 with 1,500 seats. It was designed by Henry Spann and W. Lusk was the Interior Designer.

I found the following list of owners for this theatre at http://movie-theatre.org:

Interesting theater – Ken Kavanaugh, who used to be a union projectionist, told me that it had the largest screen of any ‘neighborhood’ theater in the city.

As I remember it from watching films there, it was basically a big rectangle inside – don’t recall any balcony – but the huge screen was truly impressive.

It it’s last days, it was really getting run down. I was actually in the theater when, during the main feature, part of the rear ceiling came crashing down on (fortunately) empty seats, causing some consternation for the (fortunately) small audience in attendance!

alknobloch: You are right about the screen. I was a regular Saturday Matinee guy just down the street (Bailey Ave.) @ The Varsity (it WAS, after all, 10 cents less). The first time I walked into the Kensington, I was gobsmacked by the size of the picture. The movies also played The Ken about 3-4 weeks earlier than at The Varsity.

I grew up in the Bailey/Kensington Area, we moved there in 1951. I remember this movie theatre fondly. HUGE screen. On saturday it was a free for all, kids running all over, but we could watch cartoons all afternoon. There was also the Varsity Cinema further down Bailey which was very “artsy” for a while. The Kensington Theatre as state earlies “blew up” in the middle of the night, rumors where the “mafia” was involved, I assume for the insurance money. really sad.