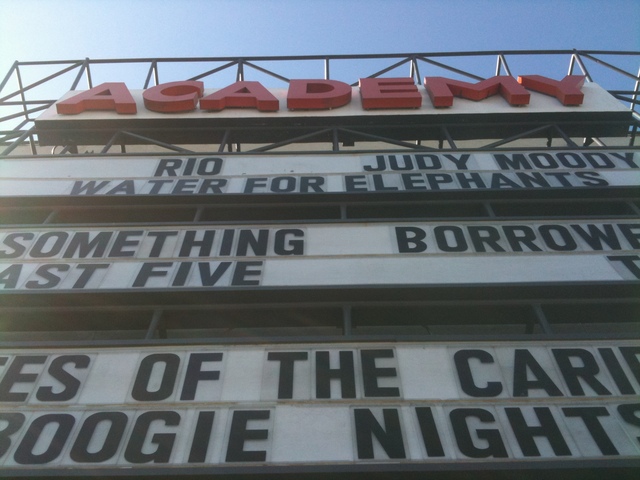 Opened as Bard’s Egyptian Theatre on June 23, 1925 with Marie Prevost in “Bobbed Hair”, and was built and operated by the L. Lou Bard chain Far West Theatres Inc. It was a large theatre with 1,709-seats in orchestra and balcony levels. It was a sister theatre to Bard’s Adams Theatre. It was later renamed Bard’s Colorado Theatre.

It was taken over on July 3, 1942 by Fox West Coast Theatres and renamed Academy Theatre, and was modernized by architect Carl G. Moeller in April/May 1958. It is a former Mann theatre that is now a six-screen art house.

Boxoffice Magazine reported on January 24, 1942, that Lou Bard had sold his Colorado Theatre in Pasadena to Fox West Coast. The house was to be closed soon for “extensive alterations.” The recent opening of Fox West Coast’s refurbished Academy Theatre was announced in Boxoffice of July 11, 1942.

I’ve always had the impression that the Academy lost its original Egyptian style and got its modern interior at the same time the exterior was remodeled in 1957, but the photo of the mezzanine lounge in this Gulistan Carpet ad in the April 1, 1950, issue of Boxoffice shows that at least this part of the interior had already been redone in the art moderne style by then. It’s possible that the interior was entirely modernized during the Fox project in 1942, and the carpeting touted in the Gulistan ad could have been part of a later refurbishing.

While the Fairfax is temporarily closed, the Academy will be running Regency’s midnight shows on Saturdays this month. Go check out “Stargate”, “Jurassic Park”, “The Karate Kid”, and “Adventures in Babysitting”. No word yet on whether the Academy’s cheaper pricing will apply.

Linkrot repair: Here is a fresh link to the 1950 Gulistan Carpet ad with the photo of the Academy Theatre’s mezzanine lounge.

“Darryl F. Zanuck, 20th Century Fox Film head, reported to Pasadena police yesterday that his car was broken into and an imported Czechoslovakian Tyrolean hat, valued at $125, was taken last Friday night. Zanuck had been attending a preview at 1003 E. Colorado St. when the theft occurred.”

“Mobbed by some 200 young film fans last night as he left the preview of ‘Blue Skies’ at the Academy Theater here, Fred Astaire lost his $1,200 watch, a gift from his wife, during the melee, when the crowd followed him to a nearby parking lot. Also snatched were his hat and handkerchief.”

Bard’s Colorado Theatre looms in the background of this 1927 photo from the Pasadena Digital Archive.

Regency Theatres Circuit closed its Academy Cinemas - Pasadena 6 on March 16, 2020 for the COVID-19 pandemic. The theatre bucked the trend of discount houses that closed permanently during COVID-19 by returning in the Summer of 2021 resuming its policy of playing sub-run discount films.

Since January of this year, Regency’s “Academy 6” are now playing first-run films.