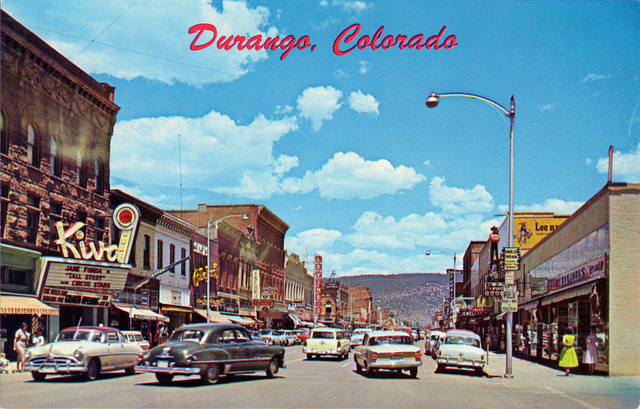 Located in a building named the Newman Block. Opened in 1927, in the 1940’s the Kiva Theatre was operated by Fox Intermountain Theaters Inc. From the 1950’s it was operated by Mann Theatres. It was remodeled in summer of 1960. The Kiva Theatre was closed in the mid-1980’s and the entrance foyers are now in retail use and a cocktail bar, while the auditorium in a billiard parlor.

Listed as open in 1930 and could hold 550. It was last operated by Mann Theatres and was open into the mid 1980’s. The building is now used for retail.

I found the Kiva Theatre at Durango mentioned in the October 13, 1928, issue of Motion Picture News. The item, about the owner of the house recovering from an operation, referred to the Kiva as having been “recently built.”

As the Romanesque Revival business block in which the theater’s entrance was located appears to date from the 19th century, the Kiva must have been either a conversion from some other use or in an addition to the building. I suspect that it was the latter.

The 1960 postcard view shows the theater’s entrance on Main Avenue, but the second photo to which kencmcintyre linked on April 14, 2009, shows that the entrance had been moved around to 8th Street by 1982. I think that the auditorium must have been located in the building to the west, extending down to Narrow Gauge Avenue. This building would have been large enough to hold 550 seats, while the ground floor of the old business block would probably not have been.

Joe Vogel, The entrance was on Main Ave, but a 1982 fire swept through most of the city block. While it didn’t burn to the ground, it was possible to still use the theatre but a new entrance had to be built on 8th Street.

Thanks, Edie. I see that the rebuilt entrance to the Kiva was in the store front now occupied by a cocktail lounge called Joel’s, at 119 W. 8th Street. What I assume was the theater’s auditorium houses a billiard parlor. The original theater entrance on Main Avenue, which must have been very long, houses a boutique called Gloss.

Joe Vogel, the then new street entrance, was the Kiva Theatre’s old exit.

Milford Shields moved to Durango in 1928 to run the theater. He had previous experience as a projectionist. The photo says it was a Fox theater through the 1940s. It was in the 1950s that it became a Mann theater.

The Kiva Theatre means more to me than the average movie house. A person who worked there (he was responsible for the ceremonious “tearing of the ticket in half” job), found a certain customer VERY attractive. He got up the nerve to ask her out on a date. She accepted. She is my mom, and he is my dad.

WONDERFUL STORY EDIE BARRY, HOW ABOUT THE PHOTO OF AUDIE AND HIS FAMILY, WHEN THE KIVA WAS A MANN THEATER AT I WAS C.O.O. AND VISITED THE KIVA A ABOUT TWICE NOW RETIRED IN N.M. SOON WILL VISIT THE TOWN AGAIN, AND TAKE PHOTOS AND THE TRAIN RIDE

“Edwin Bluck, who is building the new theatre in Durango, Colo., was a Denver visitor this week, looking after some new equipment. The new theatre will contain about 600 seats. It has been named ‘The Kiva,’ and the grand opening is planned for June 21st.”

Boxoffice, Aug. 22, 1960: “DURANGO, COLO. – George Hyde, manager of the Kiva Theatre, proudly displayed a sheaf of telegrams received in conjunction with the grand opening of the theatre after its remodeling. … Former managers of the Kiva also sent best wishes by wire. They are: Dave Davis, manager from 1927 to 1930 … ; Mike Zalesny, 1933-1936; Jack Kramer and John Tella.”