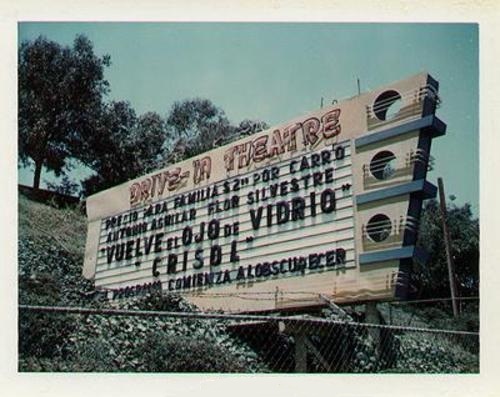 The Floral Drive-In was opened August 18, 1950. By 1957 it was operated by Aladdin Enterprises. From June 10 1962 it went over to screening Spanish language movies. This was part of the Pacific Theatres chain in the early-1980’s and was still open in June 1981.

I grew up not far from this Drive-In. It was located on the boundry between Monterey Park and East Los Angeles and just off Monterey Pass Road. By the time I got around to it in the late 60’s and 1970’s the drive in had gone over to all Spanish film programing and was very popular with the locals from East Los Angeles. This Drive In was very popular on Saturday nights with families as cars would line up the length of Monterey Pass Road waiting to get in and score a prime spot. The lads and I used to sneak in and sit in the back row on cardboard and watch all the great Mexican actors, though we did not understand a lick of Spanish. But I do recall that they used to play a lot of films starring the classic Mexican actor “Cantinflas” and those, of course, trancended language and were very, very funny. They tore it down in 1986. Here’s a link I found of the old marquee:

I remember as a kid in the 70’s seeing a movie screen in the distance when my family would drive the 60 just passed Atlantic Blvd. If I was lucky, I’d see a movie playing on it if we drove by at night. Big thrills for a kid!

Great memories of the drive-in theaters in LA county. Those were fun times.

Here is an aerial view circa 1980:
http://tinyurl.com/ycnvx3m

Here is an October 1961 ad from the LA Times:
http://tinyurl.com/yguhv9e

Now a business and industrial park.

What great ads Ken mc.Love them.

I never actually went to a movie there, but I lived a mile away up the hill in Monterey Park. So one of my most vivid childhood memories from the ‘60s is of hearing a chorus of horns honking from the theater whenever the movie would start late or break down. Which was pretty much every weekend night…

The Floral was included in advertisements in the LA Times as late as June 1981.

The Floral Drive-In held a reopening on June 10th, 1962 for Spanish-language movies. Another ad from La Opinion posted.