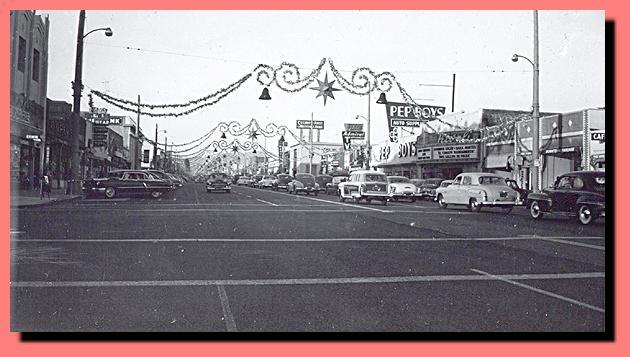 Built and operated by Greenberg & Seibert, the Rivoli Theatre was opened August 18, 1921 with Roscoo ‘Fatty’ Arbuckle in “Crazy to Marry”. By 1941 it had become a District 2 Fox theatre.

It was razed for a parking lot for the federal building.

Joe — Many thanks for the information on Sherman Way — and the link about Valley street names. Your research is much appreciated.

On the night before Easter ‘71 I went to the Capri to see MASH with Butch Cassidy as double bill with a good friend. It was smaller than the main Van Nuys theater, but a nice memory. Thanks to Joe for the info on street names in the Valley!

Yes Chuck, I think it would be best to list the theatre as you say, or both ways. The last time I went to the Capri, dad too us kids to see the original version House of Wax (1953) in 3D. I think that was about 1966 or so. I posted a couple of other photos and Google map on the Photos tab.

Hi POB, Glad you and your mom liked all the photos of this theatre. I wish I would have taken more of them. Take care :)

Hate to see monuments from ones past bite the dust. I worked at the Rivoli in late 1953 qnd 1954. Tore tickets, sold goodies, and set the marque. What a time. Also, ancient history. :)

This photograph of the Rivoli Theatre was taken by George Mann in 1926.

On January 28, 1972, I saw my first film in California at the Capri. I had just arrived from the Washington, D.C. area. That night “Play Misty for Me” and “Diary of a Mad Housewife” were playing there. Although I settled in nearby North Hollywood, this was the only time I went to the Capri.

Plans for what would become the Rivoli Theatre were announced in the March 18, 1921, issue of Southwest Builder & Contractor. Greenberg & Siebert were the developers of the project, which was designed by the Architectural & Engineering Co., which had its offices in the Story Building in Los Angeles. I’ve been unable to discover anything about this generically-named firm.