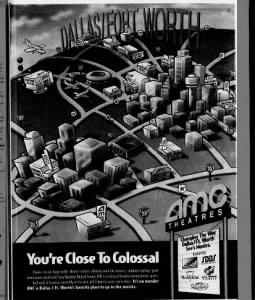 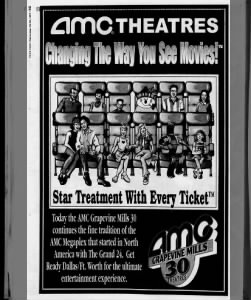 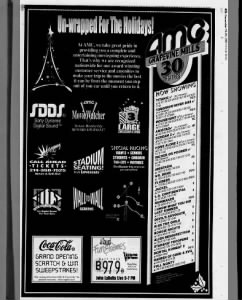 The AMC Grand 24 Theatres in Dallas had opened May 19, 1995 and was such an immediate, bombshell hit that it spurred a megaplex boom in the DFW area and beyond. Three projects would be announced by AMC that ramped up screen count to 30 in Mesquite, Grapevine, and Frisco, Texas (that latter of which was later changed to an interior 24-screen venue). In Grapevine, it was August of 1995 when the Mills Corp. announced a mammoth outlet mall. It was the eighth for Mills, called Grapevine Mills. It was another of its concept destination centers that already existed including the St. Louis Mills, the Gurnee Mills near Chicago, Potomac Mills in Virginia, Franklin Mills in Philadelphia, and joining projects on the books including the Ontario Mills, Concord Mills, Arundel Mills, and Katy Mills complexes.

Grapevine Mills featured six neighborhoods in a circular race track layout with two pass through stores allowing quicker north to south pedestrian travel. Entertainment and food would be a key concept and AMC got an outparcel location it was calling the AMC Odyssey 30 just yards away from the Mills' North entry/exit by the Sega GameWorks arcade. The space-themed AMC venue by RTKL Associates had a playful 80-foot space themed attractor.

Further food and entertainment steps away included a Virgin Megastore with CDs and DVDs, the Jekyll & Hyde Club / Eerie World theme restaurant featuring animatronic puppets from horror films including those from “Killer Klowns from Outer Space,” the Stockyards Food Court, and Dick Clark’s American Bandstand Café. An amazing iWerks Extreme Screen Theater was also planned for the Grapevine Mills to present educational films. However it was scrapped during the planning stages of the complex.

The 6,360-seat AMC Mesquite 30 - which had a rustic, western theme - and the AMC Odyssey 30 - which had the space-aged theme - were cousins with 6,360-seat capacity and the auditroia ranging from 118 to 603 patrons. So similar were the two theaters that the AMC Mesquite 30 employees were sent to Grapevine Mills to train there when the Mesquite project fell eight months behind schedule. AMC changed the name of the Grapevine location from the Odyssey to the AMC Grapevine Mills 30 just months prior to the opening. It would do the same for other Odyssey projects though some such as the AMC Oakview 24 in Omaha still had Odyssey exterior signage.

AMC Grapevine Mills 30 blasted off on December 19, 1997. Despite the name change, auxiliary concession stands were still named as the “Big Dipper” and “Little Dipper,” planetary signage was above many auditorium entries, a galactic ceiling motif was in evidence, and the cinema’s arcade room at launch was known as the “Galactic Gallery.” And it was hard to miss the aforementioned large attractor in the front with its AMC globe. But straight movie going was not the ticket at the end of the 2000’s opening decade as overbuilding of megaplexes and aging multiplexes allowed start-ups to take closed cinemas and create full kitchen and bars that challenged multiplexes. Cinema Grill, Movie Tavern and Studio Movie Grill were just a few of those upstart circuits.

Revenues were fading to the point that AMC’s Grand did the unthinkable bolting at a 15-year leasing option point while the Grapevine Mills rocket engine was sputtering with revenues down 40% from 2003 to 2010. The side concession stands had been taken out of commission at the Mills due to decreased foot traffic and demand. In Summer of 2010, the east concession stand would be renovated out and replaced with a full-service kitchen. That would coincide with 13 auditoriums in the kitchen’s stratosphere getting major renovations as part of a $7.5 million overhaul reducing seating and allowing for in-theater ordering and consumption. Eight cinemas were branded as Fork and Screen auditoriums and five were Cinema Suites. The arcade alcoves would also be renovated out and would help create the MacGuffins Bar with big screen TVs. And 35mm projectors were mostly phased out as digital projection would now be in all 30 screens instead of select screens. The venue became the AMC Dine-In Grapevine Mills 30.

Both the AMC Mesquite and Grapevine Mills had also taken their largest screens and designated them as IMAX experience auditoriums. While these screens were derided by many as “faux Max” screens, they added branding and additional revenue to the location with upcharged admission pricing. The retrofitting nationwide for AMC was in high gear when Dalian Wanda Group of China bought AMC in 2012. Recliners became the thing greatly reducing seat count and more Fork and Screens would be built including the south screens at the AMC Mesquite 30 in 2013/2014.

For both the Grapevine Mills and Mesquite, the main and only-used concession areas received high-tech self-serve Coca-Cola mixing stations and Icee drink dispensers. Another large auditorium became identified at each 30-plex as an AMC Prime / AMC Dolby Cinema theatre. In 2019, AMC began to convert the west side concession stand at Grapevine Mills to a full-serve kitchen. But when COVID-19 hit, the project was scrapped and the theatre continued with 13 upgraded seat option auditoriums, two large screen upcharge options, and basically the original auditoriums on the opposite end.

AMC Dine-In Grapevine Mills 30 closed along with the rest of the circuit on March 16, 2020 when the coronavirus pandemic hit. Seven DFW locations reopened August 20, 2020 with a 15 cent night as the AMC was also celebrating its 100th Anniversary year of operation (when combined with Dubiknsy Bros.). Grapevine and Mesquite were two on the list. As the 2020s continued, both 30-screeners in DFW tried to remain viable without squandering increasingly scarce facility enhancement budgets especially when Dalian Wanda Group sold off the AMC circuit in 2021.

Finally found the grand opening ad for this cinema. Upload its three pages in the photo section.

Newspapers for DFW not digitized for this time period.

More about the conversion to a Fork & Screen location: View link

This theater will become an AMC Fork & Screen location as of Dec. 8, 2010: View link

This is in Grapevine, TX, not Dallas.