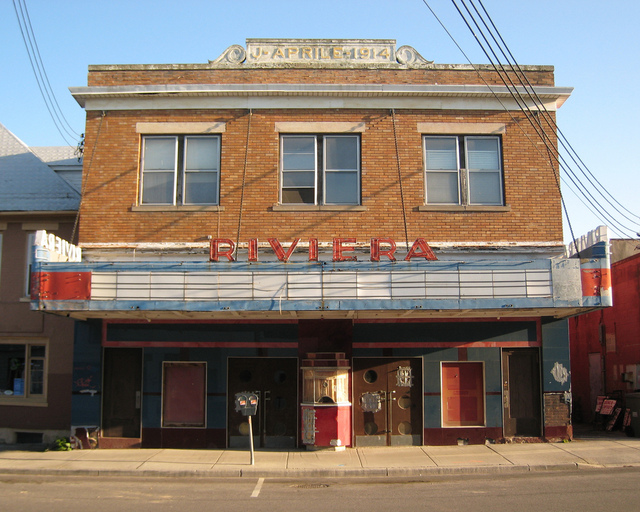 In February 2012, State funding was granted to rehab many of the buildings in the center of Geneseo, which may include the former Riviera Theatre. It was reopened in January 2017.

The “J-Aprile” on the building’s parapet refers to the theater’s original owner. An article in the Livingston Republican of June 23, 1977, tells a bit about the theater’s early years. It was built in 1914 by an Italian immigrant named Joseph Aprile. It was originally called the Rex Theatre. In 1923 it was remodeled and expanded.

There was also a Grand Theatre in Geneseo, converted from a Baptist church in 1920. It was located at Bank and Wadsworth streets. It operated both as a movie house and as a live theater. It was destroyed by fire on March 27, 1927.

oh , this makes me so sad! this is close to where I live, about 45 minutes away…would love to save it….

Update September 2014: The Riviera is set to open back up within the next month or 2. While it will not be returned to its former self. The theater is said to be in co-op with the local SUNY Geneseo.

Hey guys. The theater is actually open. Their website is: http://geneseoriviera.com/.

It has been beautifully restored and shows classic movies.