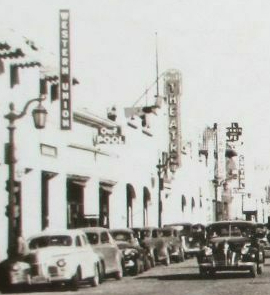 The Valley Theatre was mentioned, along with the Palace Theatre, in a Los Angeles Times article on March 4, 1924, headlined “Angelenos purchase El Centro theaters.”

A Southwest Builder & Contractor item of August 16, 1935, says that architect Clifford Balch was making alterations to the Valley Theatre.

The Valley Theatre was a Fox West Coast operation in 1940, when it suffered an estimated $5,000 damages from an earthquake that also damaged several other Imperial Valley houses, according to an item in the May 25, 1940, issue of Boxoffice Magazine. By 1945, Boxoffice was saying that the Valley Theatre was operated by independent exhibitor Frank Ullman.

An Imperial Valley directory published in 1914 lists a house called the L & S Theatre at 568 Main Street in El Centro. It might or might not have been in the same building that became the Valley Theatre.

The Valley should be listed on W. Main St., which is the historic center of town. That’s undoubtedly where it was. I have a strong suspicion that it was replaced by the drive-up teller and ATM lot of the Union Bank at 576 W.Main Street. To the east of the driveways is a vacant store, and next to that is a bike shop with the address 560 W. Main. The vacant store might be at 566, but is probably 564. The Valley Theatre has most likely been demolished.