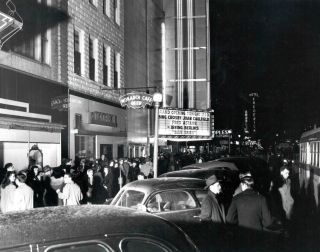 The Tipton Theatre was opened on March 15, 1947. The plain white mass of white stone on the facade, was broken in the center by a huge 80 foot tall tower, which had the theatre name across the top on two sides. Inside the auditorium, seating was provided for over 1,000 in orchestra and balcony levels.

The Tipton Theatre had a short life as it was destroyed by fire on October 21, 1951.

According to an article dated Sept. 6, 2004, the Herald-Dispatch newspaper in Huntington, WV, reports the Tipton Theater opened March 15, 1947, and was “short-lived”, but without paying for the archived article, that was all the information I could find. When I make it to the public library I will find out the date it burned, and any other information.

There are three theaters listed on Fourth Street in Huntington, but none with Lyric as an aka. This may have been a shortlived theater. The date is 1920:
http://tinyurl.com/6mn4g9

It looks like one to me. Large enough, anyway.

Here is an excerpt from an article in the Charleston Daily Mail dated 10/21/51:

HUNTINGTON, (AP)â€" Fire at daybreak Saturday destroyed Huntington’s newest theater and one of its larger department stores. Some fire damages and heavy water damage also was suffered by a cafe, a furniture store, 5 and 10 cent store and a shoe store.

The flames apparently broke out in the J. C. Penney Co in the 1800 block of Third Ave., in the downtown district. The scene is just across the street from the West Virginia Electric Co destroyed by a S200,000 fire on Labor Day. Penney’s was gutted, leaving only the framework standing. The flames burned out heavy transformers in the alley behind the building and leaped into the Tipton theater, which fronts on Fourth Ave., the main business street.

Tons of water were poured into the ornate theater before the blaze was brought under control about 7 a.m., two and a half hours after the first alarm brought most of the city’s fire equipment rushing to the scene.

The Tipton was owned/operated by Greater Huntington Theatre Corp. I have some photos and the opening day newspaper ad I will try and post when I get a chance.

Here is a few pictures of the tipton from our files. I also put a picture of the Lyric which was on 4th Avenue which Ken Mc talked about in the above post.

From the Herald-Dispatch newspaper (Huntington, WV):
“The Tipton Theater was built by brothers A.B. and S.J. Hyman, who owned the Keith-Albee and other theaters, and named for Cecil Tipton, a long-time business associate. Construction started in 1946, and the theater welcomed its first moviegoers on March 15, 1947. The theater was strikingly modern looking, reflecting what architects call Art Deco design. The plain white mass of white stone on the facade was broken in the center by a huge 80-foot tall tower, topped by the theaterÂ’s name in lights. Inside, seating was provided for an audience of more than 1,000. About 4:30 a.m. Oct. 21, 1950, a fire broke out at the J.C. Penney store in the 800 block of 3rd Avenue. When the alley wall of the Penneys store collapsed, it showered the Tipton’s roof with sparks, setting it ablaze. The flaming roof fell into the theaterÂ’s auditorium, leaving it a charred ruin. The theater was not rebuilt…Thanks to Jim Casto for the information.”
So, the Tipton theater on 4th Avenue survived only three and a half years before it was destroyed by fire.