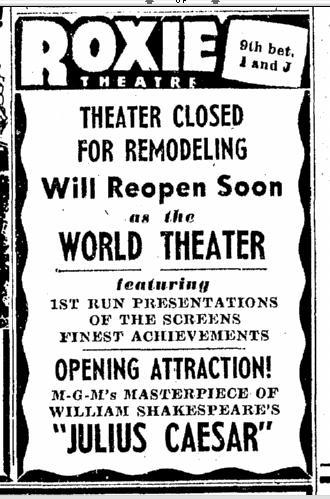 Opened on May 12, 1927 as the Plaza Theatre with the comedy play “The Patsy”. On June 8, 1935 it was renamed Roxie Theatre and was operated by the T & D Jr. Enterprises chain. In 1954, following refurbishment it reopened as the World Theatre with Marlon Brando in “Julius Caesar”. On May 24, 1969 it went over to adult movies operated by the Pussycat Theatres chain and was renamed Sacramento Pussycat 2. It finally closed in 1975.

A.G. Meister & Sons Carriage Factory currently occupies 910-914 Ninth Street. I haven’t come up with any pictures of the business, however. They may have taken over the theater building.

That’s interesting. I was wondering what the demand for carriages was in 2007. I’d be curious to see a photo of the building.

The World was a grind house when I moved to Sacramento in 1962. It programmed double features for about 50 cents admission, showings daily from 1:00 PM to midnight as I recall. I still remember the first program I saw there, a couple of Fox CinemaScope films from the 1950’s, “The Tall Men” with Clark Gable and Jane Russell and “April Love” with Pat Boone and Shirley Jones. The color on “The Tall Men” had already turned pink, the first time I’d seen than phenomenon. Do I have a good memory of what?

A short time later the World changed to a triple feature, daily change of programs, open all night policy. There was quite an eclectic mix in the programming those days. You could see fairly recent (a year or two old) features mixed with stuff from the 1930’s and 1940’s. I remember watching “Rocket Ship” (feature version of a Flash Gordon serial), an old Universal Bob Baker western, lots of the Warner Brothers classics, a bunch of 1950’s Columbia features, etc. etc. ect. There was no rhyme or reason to the combination of titles on the same program but that was typical of the grindhouses of the era.

The World was a great place for a young film buff like myself or anybody else looking to see some cheap flicks and some you couldn’t see anywhere else in town. The audience seemed to consist mainly of older people and transients and for the most part they were pretty well behaved. This was before alcoholics, druggies, punks and idiots took over the grind houses. That small men’s restroom at the top of the stairs could get pretty smelly at times though! The biggest problem with the World is that they didn’t advertise in the Sacramento Bee or Union. No programs at the theater either. You had to go down to the theater or buy one the the now defunct San Francisco newspapers (Call Bulletin?) where ironically they did have a small classified ad, probably because they were part of a chain, United California Theaters I believe, who advertised all of their Northern California theaters that way.

The triple feature grind policy didn’t last much beyond the mid 1960’s. The World policy then changed to softcore sex films with a new operator. It later went hardcore and became part of the Pussycat chain, the second Pussycat in Sacramento (first was the former Encore on K Street).

I don’t remember when the Encore was closed and demolished but I belive the 9th Street entrance to the Sacramento main library now stands in it’s place. The theater wasn’t much, certainly not a movie palace, but it had it’s own character and I have fond memories of the few years I attended.

Oops in the first sentence of my last paragraph above I meant the World, not the Encore when I talked about the closing. I sure wish we could edit our posts on Cinema Treasures. As many times as I proof read them I frequently notice a boo-boo after I’ve posted.

Posting by: jwr, is very accurate. Now I really want to test your memory…I grew up in Sacto, in the Oak Park community, (1940-50s).I have a posting of the California and Oak Park,(Guild)theatres. Worked the California as a teen, and watched it, as it burned in the 1950s. Yes, the Roxie was a United Calif operation as was the
California; Colonial; Rio and Alameda, owned by several families: Syufy-Naify and ?. QUESTION: you mention remembering the ENCORE, I also worked,(a short time) prior, as the ‘STUDIO’, do you, or anyone recall? Would have been early ‘50s. Had a terrible tragedy during
one of the regular 'kiddie matinees’, a deranged person attacked,

(with a knife) a young boy in the restroom, severly hurting,(or
killed) him. Cannot find any ref in Sacto Bee past issues. Not one

of my pleasurable memories of 30 years in theatre management. I know the ‘Encore’ also became a Hispanic venue, was that prior or after ‘Pussycat’ chain? JCL

Brings back memories of the World theater my brother and me used to go to this theater way back in the late 50’s and early 60’s I just wish someone had some pictures of this place, oh by the way the price of a dime would get you in the world theater back then.

Taken over by the Pussycat theatres chain on May 24th, 1969. Another ad posted.