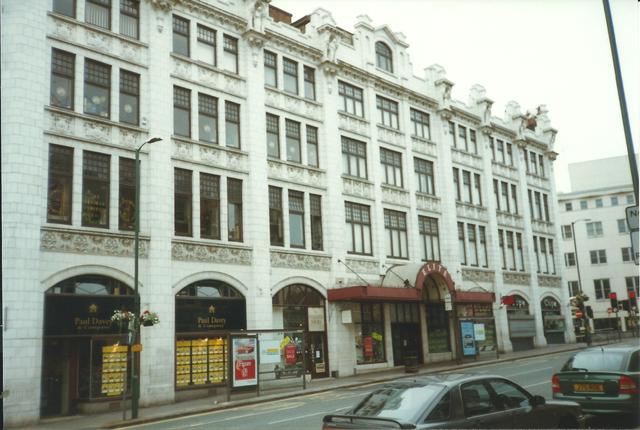 This was one of the first in a new breed of ‘super-cinema’ to be built in Nottingham. Designed by the London architectural firm of Adamson & Kinns, the facade and exterior side walls were treated in an expensive white glazed tiling and contained statues along the upper portion of the building. Internally the decoration was carried out by interior designer Fred A. Foster who created a stunning interior with the auditorium walls lined with wood panels and a great deal of decorative plaster. Seating was provided in stalls and circle levels.

It opened on 22nd August 1921 with Mary Pickford in "Pollyanna". There was a grand concert organ by the firm of Willis-Lewis which had 78 stops, plus a full orchestra. The facilities within the building also included a a restaurant, a Georgian Tea Room, a French Cafe in Louis XVI style and a large ballroom located on the top floor.

The first ‘talkie’ in Nottingham was shown at the Elite Picture Theatre, George Jessel in "Lucky Boy" and after its screening, the cinema was closed for several weeks in July 1929 for a re-furbishment. A new Compton 2Manual/6Ranks organ was installed which was opened by Cyril Birmingham.

EMI converted the cinema into a bingo hall which continued until the early-1990’s. The building was granted a Grade II Listed building status in 1990, saving it from demolition plans and it is now converted into use as a nightclub, with some retail and office use.

It has now been upgraded to a Grade II* Listed building.

The original organ in the Elite was a three manual Willis.

luckily saved from being destroyed by fire feb 2009
View link
what is it with cinemas and fires?

What a great photo.Never did any managerial reliefs in Nottingham when I was with ABC. Wish I had now, this looked a stunning auditorium.

I did a number of Holiday Manager reliefs there. In the early 70’s the Auditorium at that stage was in very poor nic. The staff where good to work with..I remember one the films showing at the time was “Love They Neigbour” My Theatre at the time was being converted to a 3 screener.. The Elite was an oddity ABC-EMI only had a 50% interest the other was the landlord that owned the block.. When The Cinema was built.. They discovered there was Projection box…. So they ended up with a very tight one and the Projectionist had to be a acrobat to get to it… Projection Equipment was Ross GC3s with RCA sound…