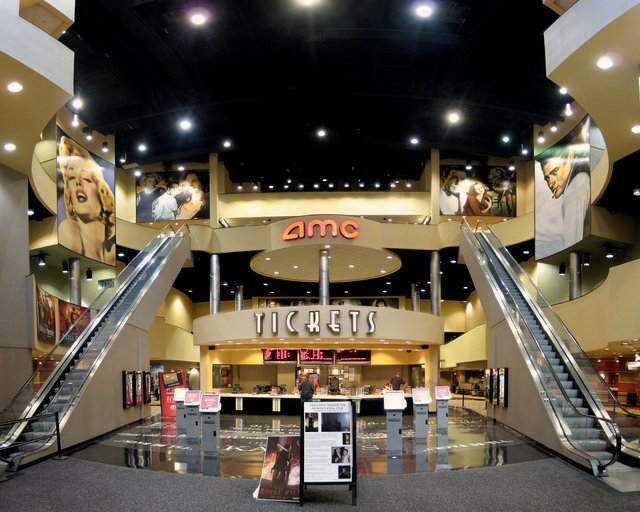 The main lobby is large and has a game room. All auditoriums have stadium luxury seating and digital sound. Ten auditoriums are on the main floor. An escalator and an elevator provide access to the second floor with the other 12 auditoriums. Two auditoriums have 410 seats, and three others have 318 seats.

The AMC Hoffman Center 22 opened in 2001. The theater has proved so popular that on opening nights and weekends, patrons often arrive early or buy their tickets in advance.

oh no… the screen is no where as immense as any of the other area museum IMAX screens – that was one question that I completely forgot to ask the IMAX techie I was talking to – yes I know, an obvious question. The expanded screen takes up more the wall (ceiling to floor) – It also appears not to be the same aspect ratio of the typical IMAX screen – it’s more 1.78 than the standard 1.34 For the first show of the day – 10:45am it was me and a lady – TWO! The IMAX guy wasn’t all that pleased with how AMC is marketing this. In the Washington Post, the IMAX denoted films are at the bottom of the theatre’s listing. The system is definately a digital system, can you believe 4K, I thought I would have been higher… my complaint of ‘Space Station 3D’ was that for a film to digital conversion the master was not from a completely flawless source, those apparent film flaws just gave you the impression you were watching film.

oh and I forgot to state this – I asked if the auditorium seating was changed in anyway – he said no.

‘Harry Potter and the Half Blood Prince’ has been bounced to next year (July) – shucks!

My friend and I caught NIght at the Museum 2 here in IMAX (lite). The auditorium seems to be about the same size as the Columbia 14 but there are no seats along the main aisle. Its either above the railing or below. Overall, the presentation was good. The staff seemed pretty friendly and helpful. $14.50 for IMAX-lite… hmmm.

I tried to catch Shrek 4 in IMAX-lite 3D by sneaking off from work early. I arrived 10 mins late and was just about to enter when….the fire alarm went off. I thought it was a joke and that they would let me in anyway..but NOOOOOOOO. Everybody out! Then the manager said they had to wait for the firemen to come in and inspect the building and shut off the alarm once the building was secured.

At first, rumor had it that some delinquent falsely set off the alarm. Then it was revealed that there may have been a sensor problem and until the cause was known, the shows would be cancelled until further notice. GREEEAAT! I went to CA Tortilla or whatever its called and had a bite to eat and returned to find the crowd gone but the police had arrested a young man. At the emergency exits there were paramedics with a stretcher, no one was in it…were they going in? Or, going out?

Fortunately, the manager said he would call the DC area AMCs to inform them to accept the movie stubs as re-admit tickets. We’ll see.

The AMC Hoffman Center is probably the largest multiplex to date in the great DC metro area. This three story edifice covers at least a quarter of a city block, has twenty-two auditoria each seating between 100 to 450. The IMAX regretfully is not true IMAX (e.g. Smithsonian IMAX theatres) but does has the capabilities for 3D presentations. Photos from 2010: 1, 2, 3, 4, 5

of the only two theaters in the DC metro area that is booking Werner Herzog’s ‘Cave of Forgotten Dreams’ – Hoffman’s presentation is 3D digital projection (hooray!) – Landmark Bethesda is not (booo!)

I really don’t like these theaters – for starters no one comes around to close the doors – so all the noise comes into the auditorium as well as any ancillary light – I shouldn’t have to do it myself. Secondly, I was more than peeved that the first showing of James Cameron’s ‘Deep Sea Challenge 3D’ for the first 8 minutes the 3D projector aperture wasn’t set right – the colors were all off and the image had no pop. Had to go down three flights to tell someone this, missed the beginning. [insert annoyed face]

When I lived in DC I hated this theater. It is the opposite of a movie palace. It has sterile box theaters, and if I didn’t know there were seats and screens behind the doors I would think this is some sort of office building not a movie theater. Yes it is nice and modern and has all the amenities but its a big sterile theater.