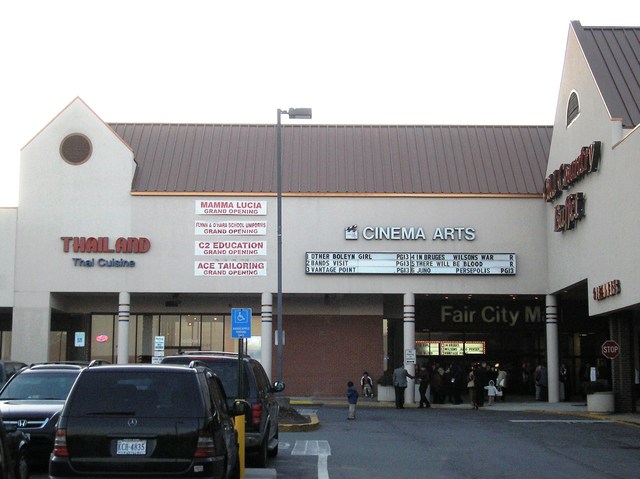 Located at the corner of Fair City Mall in Fairfax, Virginia, the Cinema Arts Theatre, originally known as the Fair City 6, opened its doors in 1989. Closed for a short time in 2000 by Cineplex Odeon, the theater reopened later that year under independent ownership with a new focus on first run indie and foreign films, though blockbusters are booked from time to time. House sizes range from 108 to 290 seats.

Recently all the screens have been converted to digital projection (Barco) and three auditoriums can playback 7.1 surround sound.

was there this morning to see “Land Ho!” (an utterly charming movie by the way – highly recommended) – but I have to say the coffee they serve is surprisingly good and cheap $1.75 (with refills) – and you can add flavoring to it. Little things like this make me happy – and six bucks (admission price) before 11am – thumbs up!

I see that Cinema Arts will be showcasing “Interstellar” in 35mm come November… Nice!

The largest auditorium was equipped with a 70mm projector at one time but was never used to run a 70mm print. The projector was removed in 1988 and sold. It was replaced with a 35mm projector from University Mall 3 which had closed.

Cinema Arts is a quality art house in Fairfax City. Programming ranges from the occasional top-performing blockbuster to mainstream arthouse fare to more eclectic releases, including the occasional DC Area exclusive. The seating has been recently upgraded; still rocker style rather than full recliners but they’re wide and comfortable. Projection and sound quality are top-notch; they play movies appropriately LOUD here compared to some chain multiplexes. All six screens are side-masked with Screen 1 being pretty large for an art house. All the other screens are roughly the same size with Screen 2 being a bit smaller. Seating capacities range from 253 in Theater 1 to 64 in Theater 6 for a total seating capacity of 878.

There is a Century JJ film projector in the booth of Theater 3 but I don’t know if it’s operational. The last film engagement I can recall here was Interstellar in 35mm in November 2014.