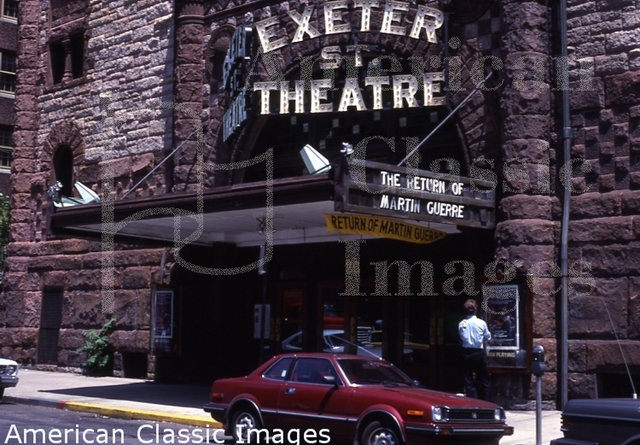 Once housed in the First Spiritual Temple at the corner of trendy Exeter Street and Newbury Street, this theater opened on May 4, 1914, with 1,376 seats.

The Exeter Street Theatre was a popular movie haunt until it closed in 1984.

The theater later became a two-story Waterstone’s book store which was badly damaged by fire in 1995. The theater reopened in fall of 2005 as a Montessori school.

Stumbled across some great quality photos (circa 1984) of the theater (along with various other Boston theaters) on flickr here: View link

The Exeter Street Theatre is listed at “cor. Exeter & Newbury streets” in a 1918 Boston street directory.

Clarence Blackall was the architect for the conversion of the First Spiritualist Church into the Exeter Street Theatre in 1914, but the church itself had been built in 1884 from designs by the Boston firm Hartwell & Richardson. Henry Walker Hartwell and William Cummings Richardson (no relation to Henry Hobson Richardson) designed the church in the popular Romanesque Revival style.

Following the closure of the theater, the auditorium space was filled with two additional floors. The 1995 fire did considerable damage to the upper part of the structure, and the subsequent repairs led to additional interior alterations. I don’t know how much, if any, of Clarence Blackall’s interior work from 1914 remains, but Hartwell & Richardson’s exterior has survived remarkably well for a century and a quarter.

I went into the building after Waterstone’s Books located in it. The theater was an “upstairs house”, with the auditorium on the second floor. I recall that the only trace that was apparent to me was the street-level foyer and staircases.

The Exeter was a wonderful theatre. Played mostly Art and off the wall films. Even played The House of Wax in 3D around New Years Eve in 1972. King of Hearts played forever. They even had great success with the 1st Muppetts movie because no one else wanted it so the management took a chance and it played well. They had a wonderful Stereo Sound system back in the 70’s. The only thing wrong with the Exeter were the seats. Old and uncomfrotable. A great movie experience though.

I recall “King of Hearts” playing “forever” at the Central Square Cinema across the river — not here at the Exeter.

A very eccentric woman named A. Viola Berlin ran the Exeter Street Theatre. She seemed to be the only person in the world who could get along with Donald Rugoff, the mercurial owner of Cinema 5 who supplied the Exeter with its remarkable string of hits from about 1967 to the early 70s. I seem to recall as well that Ms. Berlin used the theatre on Sunday mornings for some sort of religious services, thereby receiving some kind of tax advantage. Above all, I remember that the Exeter was the one Boston theatre where you went to the theatre rather than the movie playing there because you knew the movie playing there would usually be good.

My mother used to go there during the 40s. She remembered a funny little guy who used to man the ticket booth.
She went back 35 years later – and the same guy was working the ticket booth. She recognized him instantly. She also told me the Exeter was one of two Boston movie theaters that showed foreign films. The other was on Mass. Ave and was flattened by the Christian Scientists. She remembered seeing Kind Hearts And Coronets at one of these two, in 1949.

In his 1981 book “Reflections of a Rock Lobster-A Story About Growing Up Gay,” author Aaron Fricke mentions visiting the Exeter Street Theatre for a showing of “The Rocky Horror Picture Show.”

I’m surprised Rocky Horror wasn’t mentioned previously, as it was the theater’s mainstay from 1978 until it’s closure in 1984. 1100 or so seats including the awesome balcony, and it was sold out more times than not on Friday and Saturday at midnight. I performed there for many years until the theater shut down.