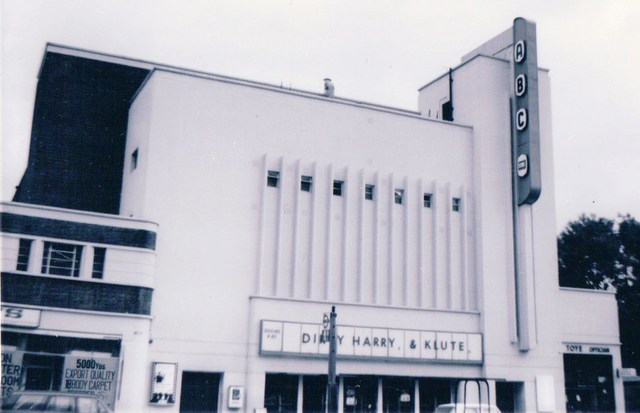 Located in Hounslow, Middlesex, today a district in the west of Greater London. The Regal Cinema was another splendid building built by Associated British Cinemas(ABC) and designed by their ‘in-house’ architect William R. Glen.

It was located on Staines Road at the junction of Bath Road and the exterior had a large fin tower feature over the entrance with the main facade faced in cream terra-cotta tiles. Inside the auditorium there was seating provided for 1,260 in the stalls and 600 in the balcony. Decorative details on the side splay-walls of the auditorium had panels depicting deer and antelope. Provision was made to acommodate organ chambers, but an organ was never fitted into the cinema.

The Regal Cinema opened on 27th November 1937 with Otto Kruger in "Glamorous Nights" and Warner Orland in "Charlie Chan at the Olympics".

The cinema led an uneventful life, becoming the ABC in 1964. The ABC closed on 21st May 1977 when an audience of 150 watched the final films roll; Marjoe Gortner in "Food of the Gods" and Dale Robertson in "The Legend of Machine Gun Kelly"(a TV movie-Melvin Purvis G-Man).

The ABC was demolished and the site re-developed, with a Safeway supermarket and car parking. By the summer of 2008, this too had closed.

From about 1970, we would watch the big blockbuster films that were aimed at kids here as first choice (being closest to us) In the early seventies, mother would drop my brother and me off at the ‘Saturday morning Cinema show’ We would watch Danny the Dragon and such like. We would collect badges that had one letter of the alphabet on them. I still have one somewhere.

Inside it was like a palace…it was vast and cavernous! I always remember there was a indented design like a giant upturned plate in the middle of the enormous ceiling. I loved the grandeur of that building. There was a rose or pink colouring on the walls and bronzed looking gate design. It was difficult to establish the real colours as it was never light enough inside.

This beautiful building that survived the blitz was closed due to diminishing audiences in about 1977. The Woolworth and other shops just 100 yards away were bombed in the war.

Still, the building then became our plaything. It was also home to one homeless man. Eventually the ‘kids'of Hounslow found their ways in. The cellars were flooded almost to the ceiling. Such an adventure! We would dare each other to travel through dark bits alone. I finally plucked up the courage to walk across that ceiling design. It was suspended from wires and was thin ( suspended plaster rendering) We went into the projection box. I think much of the old projectors were in situ. my brother smashed a large jar of silver liquid that dissipated into a million silver balls. I realise today that is the very dangerous element indeed: Mercury!!! We even managed to get up onto the roof. I collected hundreds of 'Rank’ envelopes, old tickets and other memorabilia from the offices – still have some of those!

Finally the day came when new hoardings went up and the building (one of the biggest in Hounslow at that time) started to implode through demolition in 1978. I remember the dust smelling of the cinema. I remember seeing the rooms and offices we played in, hanging off walls in mid air high up. I felt very sad. I felt like a much loved summer holiday was finally over. The site remained empty for a long time until a new supermarket was constructed.

By the mid 80’s people just didnt go to the cinema anymore. We got our first video recorders (VHS AND Betamax) in 1980/81. People rented videos from the plethora of video shops opening up everywhere. Of course, cinemas became popular again in the late 80’s Multiplexes opened everywhere.

Still, a cinema like the ABC Hounslow cannot be matched by tiny, modern and functional venues. Such a shame that she didn’t survive to be here today. I am so glad to hold those memories. I just showed my 5 year old son the picture you have on this site. He said “why are you sad daddy”

Loved your story mulattokid, I remember seeing Jaws there & the whole audience jumping back collectively during that scene where they were poking around the fisherman’s upturned boat & the guy’s head popped out !

Being part of the Asian community I also saw many Indian Films there on Sundays. That used to be so special to us in those days.

I too spent many happy hours in that very cinema, watching Flash Gordon, Old Mother Riley, and a host of other stuff. It was 6d for the morning’s entertainment as an “ABC Minor”. , and I’m sure my mother thought it was a shilling well spent to get my brother and I out of her hair for a while.

I too mourned when I discovered it was going to be demolished, for it was indeed a palace of the imagination. The last filmI saw there was a showing of Ben Hur shortly before it became rubble. So sad.

“We are the boys and girls all known as.. Minors of the ABC… And every Saturday all line up… To see the films we like and shout aloud with glee.. We like to laugh and have our sing-song… Such a happy crowd are wee..eeeee We’re all pals together… We’re Minors of the ABC.”