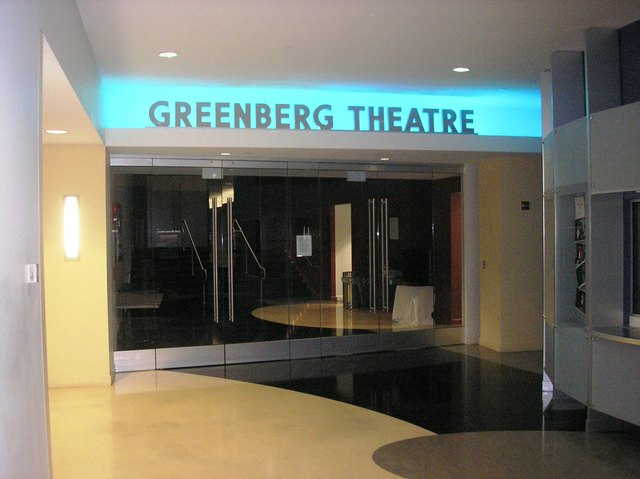 On April 12, 1978, Circle theaters opened the Tenley Circle Theatre as a twin theater with "Coming Home" and "A Little Night Music" The large house sat around 500. The smaller house sat around 200. A third auditorium was added in 1980.

In the late-1980’s, Circle was bought by Cineplex Odeon, which, though also opening the Wisconsin Avenue 6, continued to operate this very popular theater. The Tenley Circle closed in 1999. The theater was often used by film festivals, even after closing.

In March 2003 the state-of-the-art, 300-seat, Harold and Sylvia Greenberg Theatre opened in the former Tenley Circle space, funded by a $2 million gift by the theatre’s namesakes to American University. The theater is used by American University and the DC community for plays, performances, film screenings, meetings, and private functions.

Contributed by Howard B Haas, Hoiles
Get Movie Tickets & Showtimes

The Tenley theatre had a 70mm system when LITTLE SHOP OF HORRORS (Frank Oz remake) opened in December of 1986. Question: was the theatre always set up with three auditoriums? or was it just one theatre initially?

sorry, correction, I had forgotten that it was two initially and a third screen was added. In it’s current configuration, the space is now just one auditorium with raked seating. Too bad, no films are being presented for this year’s Filmfest at the Greenberg.

Regarding the original Tenley Circle Theatre: the small auditorium held 198, the middle one 270, and the large auditorium 454. I worked at the Tenley from 1983 to 1985. Some of our visitors during that time included Siskel and Ebert, Lynda Carter, and Ted Koppel. It was a magical place.

I can’t recall was ‘Blue Thunder’ when it played at the Tenley presented in 70mm?

Wow. I never knew this place existed. I remember it was the Tenley 3 for Circle Theaters back in the day. . I believe all my visits were in 2 of the 3 auditoriums. One of the 3, which had 70mm, had to have a screen not much larger than 40 ft maybe? I remember seeing Blue Thunder here in 70mm, in ‘83. I vividly remember the climax of the movie where Roy Scheider and Malcolm McDowell were dueling it out in their helicopters. The 6-track sound was enveloping with the whirring of the helicopters.

Prior to that, I recall seeing Ray Bradbury’s ‘Something Wicked This Way Comes’ to a sold out audience, on or about Spring ‘83. This was in the 2nd largest of the 3 theaters. The trailers and tv ads made the film more scary than it really was even for a youngster like me at the time. There was this drunk college guy, who sat behind me, who’d make comments that would elicit this chain response throughout the audience.

For example, during the scene where the boys are pursued by the Dust Witch, played by a then hot looking Pam Grier, the ‘Witch’ becomes this lightning/hand effect that was searching for the boys. When it flashes into what seems like hundreds of spiders about to jump the two boys, the film jumps as if everything was a nightmare. The jerk SCREAMED..and these other girls screamed and then there was total laughter. Then he has to blurt out that the boys look older.

When I read about this film’s production in the now-gone sci-fi/fantasy magazine Starlog, indeed they did reshoot the scene. The kids had started puberty where even their voices had deepened somewhat.

What I’d like to call Theater #2, didn’t have 70mm, but did have decent surround sound. At the end of the movie, where Jason Robard’s character and his son try to find each other, you can hear the son’s pleas and cries all around the theater…‘Dad..dad…daaad.. I..I..I..love love…love..you..you..you.’ something to that effect. Jonathan Pryce was pretty good as the villain. The effects were supposedly one of the first films to utilize CGI animation, which was quite cool at the time, with the materialization of the carnival and Mr. Dark’s ripping pages of an almanac that morph into fire.

I’ve seen ‘Innerspace,’ which I believe was in 70mm and ‘The Big Easy(?) both with Dennis Quaid. The latter film is memorable for two reasons: 1) We saw Lynda (tv’s Wonder Woman) Carter in the audience and she was gracious to say 'hi’ to everyone when she was discovered by someone in the audience. 2) My Mom came with us. The latter is not so bad, but for the fact that in the movie there is a scene of digital foreplay that went over her head even after my cousin tried to explain the scene to her. :)

Lived in DC for only 1 year in 1978. Fondly remember the Tenley Circle as one of the best places to see a movie. Specifically, I remember seeing Phil Kaufmann’s “Invasion of the Body Snatchers ” and Terence Malik’s “Days of Heaven” both in 70mm Dolby. So sorry to see it no longer exists as a commercial venue.

can someone jog my memory, but I seem to recall ‘Arachnophobia’ played here in 70mm – or was it over at 4000 Wisconsin? I also thought Ridley Scott’s ‘Legend’ was 70mm, it’s possible it was only 35mm.