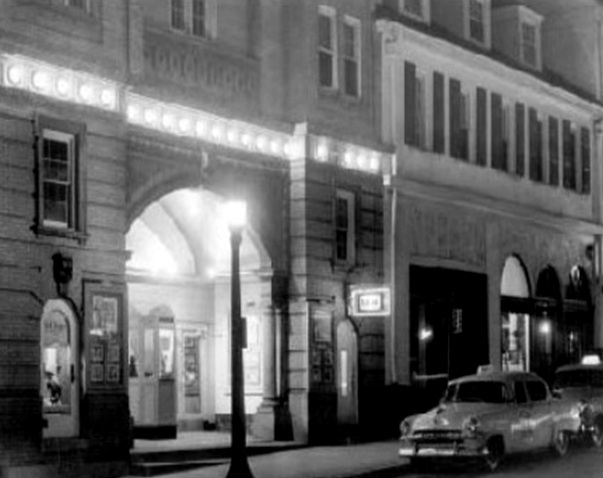 Lost Memory has noted that there may be an AKA of the Garden Theater for this addition.

There is a clothing store called PS Zoo at this address now. Presumably this is a new building, but I can’t say with certainty.

The Nittany Theater building is now occupied by an M&T Bank building. The facade looks like it’s been beautifully restored – it probably looks about as good now as it ever has. There is a historical society placard on the front of the building that identifies its heritage as this theater.

Saw several movies there as a kid. Not a great theater but not a bad one. It did have a balcony but it was usually closed because people would go up there and throw stuff down on the audience. I moved to the area in 1972 and only remember at as “The Garden”.

I remember it as The Garden – one of many downtown theaters during the moviegoer’s heaven that coincided with my college education.

But by April 1969, the Nittany was showing mainly adult films, starting with the X-rated “Inga” from Sweden, continuing with Russ Myer’s “Vixen” and a steady stream of others. A few adult “art” films, such as Ingmar Bergman’s R-rated “Shame” (1968) also appeared. But these soon disappeared in favor of X-rated and unrated fare. The Nittany closed down during the summer of 1972. At that point, Stanley-Warner moved its adult film operation to the larger State Theatre, where “Deep Throat” played in September 1972.

The Nittany re-opened as The Garden Theatre on October 26, 1973 with a double feature of “Extreme Close-Up” (1973) and “The Boys In the Band” (1970). The Garden Theatre was damaged by a fire attributed to arson on January 28, 1980 and reopened after repairs in January 1981. The Garden closed in January 1986. At the time, the building was owned by Sidney Friedman of State College and leased by Cinemette Corporation.