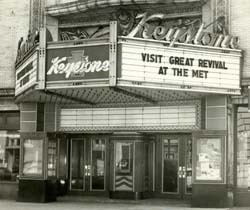 TDesigned by architect Albert E. Westover. The Keystone Theatre opened October 23, 1911 with 6-acts of vaudeville. Movies were being screened as part of the program from 1915. In 1919 it was equipped with a Moeller 2 manual 9 ranks organ. In 1925 alterations were carried out to the plans of architect Theodore Search Fett, and in 1926 Moeller organ was replaced by a larger Kimball organ. By 1941 it was operated by Warner Bros. Circuit Management Corp. The Keystone Theatre was closed on July 5, 1954 with Elizabeth Taylor in “Elephant Walk” & Alex Nichol in “The Black Glove”. It became the Keystone Tabernacle Revival church for a short while until they moved into the Metropolitan Opera House.

The vacant building was auctioned off on September 25, 1958 and the winner of the auction demolished the Keystone theatre in May 1959 for the site to be used as a parking lot.

Here is an undated photo:
http://tinyurl.com/ys3dvh

This photo, dated May 5, 1959, shows the Keystone just before demolition.

The October 22nd, 1911 grand opening ad can be found in the photo section. It opened on the 23rd.

This was the theatre that we went as kids. When they were tearing it down, my sister and I were walking home from school and there was a worker named Johnny from the Cleveland Wrecking Co. who let us walk the theatre and take what we wanted. I took the old dial up phone that was in one of the offices. I was only 12 at the time. I took two placards that said 10 cents and a penny tax to get in. What I didn’t know until I looked on this site that on opening day of this theatre my grandmother performed there. She is billed as “Cotter & Boulden”. What a wonderful surprise. My grandmother Ada Boulden played the banjo and her second husband played the piano. I never knew her. I still have the telephone. It sits on my bookcase.

The Keystone closed permanently after a double feature of “Elephant Walk” and “The Black Glove” supported by fight highlights of the Marciano-Charles boxing match on July 5, 1954. It was used as a house of worship until being auction in 1958. The auction winner had the building razed in 1959.